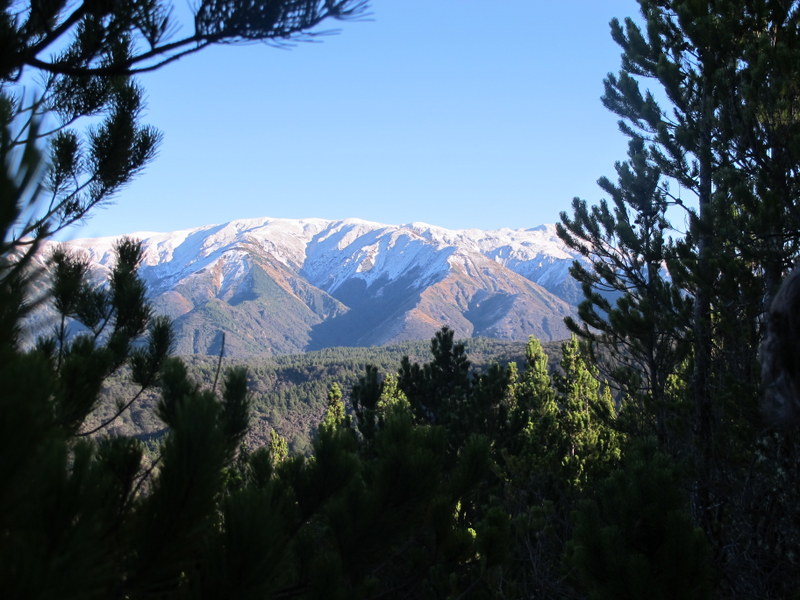 We left Napier on a crisp frosty morning and were pleasantly rewarded with stunning white scenes as we drove along Puketitiri Road towards the Kawekas.

Lotkow Rd was no exception, with roadside vegetation and trees covered in whiteness. Crossing the first ford proved a little tricky, especially as the van had to roll over a shingle hump before nose diving into the water. The second ford was a lot easier.

Because we were beginning the tramp in bush, most of the group started off wearing three layers, a few even in jackets, leggings, hats and gloves. The climb was steep in places but it was dodging the icy parts that was the hardest. We stopped frequently to regroup, delayer and admire the views across the ranges and over to Napier. Almost an hour later, we reached the Black Birch Ridge where we were in and out of the sun and shade. Kaweka J and North Kaweka, covered in snow, became apparent. We looked out for our three overnighters tramping up Makahu spur, but couldn’t spot them. 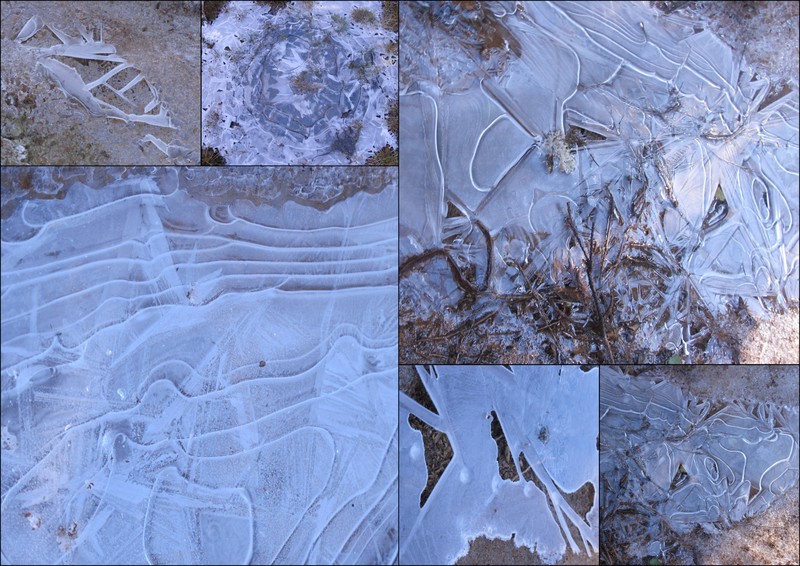 The photo collage of puddles

As we walked along the wide track, a number of beautifully patterned frozen puddles attracted our attention. Some great photo moments! Halfway along and at 1360 metres, we popped down (five minutes) to Black Ridge Bivvy, a look-a-like dolls’ house which sleeps two, built in 1962 and appears in good condition. What a very cold and damp place, though.

Morning tea was in a sunny spot in a clearing in the pines, with Kaweka J in full view. No wind, bright blue skies, icy puddles and a dusting of snow in places – what a treat!

Then after 15 minutes through mountain beech and a drop of at least 3-5 degrees in temperature, we arrived at Littles Clearing in a time far less than DoC predicted. A picnic table and seats to dine in the sun, beautiful views and a chat with a hunter from Palmerston North who was erecting his tent ready for the long weekend. He demonstrated the ‘Billowing bags.’ 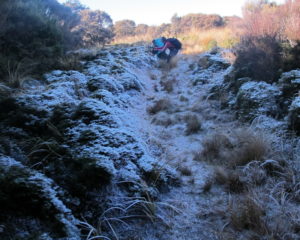 We retraced our steps, and hoped that the ice had melted by the time we reached the steep decline, which it had. The sun was still shining! Then it was back through the fords and home. But the van didn’t like the second ford. Although it was driven very cautiously through the water, the back wheels sank in the shingle in the middle. The more ‘women power’ we used to push her out, the deeper the wheels became wedged. We decided we weren’t going to get her out and the water being freezing didn’t help either!

Plan B: Call the AA, but there was no cellphone coverage.

Plan C: Two of us walked up the road to find reception. Just then, a sturdy 4-wheel ute came around the corner. Relieved!

Plan D: These two young men were very keen to help but the twine they had broke very easily as they tried to pull us out.

Plan E: Then they drove away to get a tow rope and returned 40 minutes later. It was a huge tug as the road was uphill from the ford, plus the hump that the van had to get over. All wheels were spinning! But it was successful, thank goodness.

We were extremely grateful for the guys’ assistance and insisted on some payment but they were very humble and didn’t want to be rewarded. They were just going to check out some hunting spots but now they were heading to the hot springs to have a soak! Our toes thawed out by the time we arrived at Park Island. Despite the drama at the end, the tramp, company, chats, the weather and views were simply excellent.

Aranga Hut On Saturday 14 January the tramp was changed to a loop in the Northern Ruahine Range. … END_OF_DOCUMENT_TOKEN_TO_BE_REPLACED

Aranga Hut On Saturday 14 January the tramp was changed to a loop in the Northern Ruahine Range. … END_OF_DOCUMENT_TOKEN_TO_BE_REPLACED