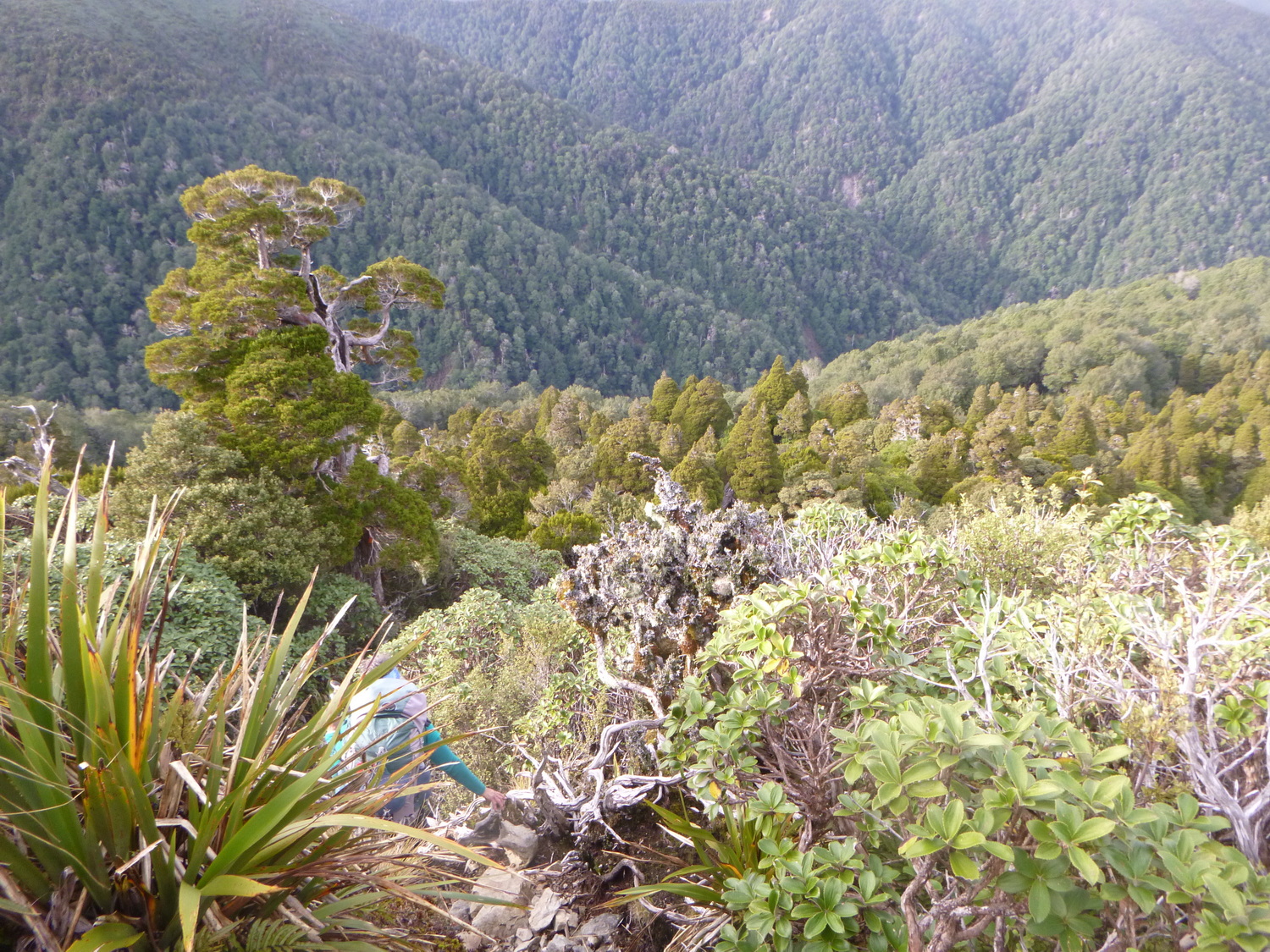 With most of the club members heading into Rangiwahia for an overnighter, Geoff and I decided that we would do more. Our plan was to head into Rangiwahia Hut via the Deadman’s Track, and overnight with the other club members. Then the following day, head back up and over to Triangle Hut, and then on to Iron Gate Hut for the second night. On the Monday, we would head up and over the Ngamoko Range to Otumore and then down to the Kashmir road-end.

After driving over the Napier to Taihape Road, now all tar-sealed but still a windy road, we had a coffee break and then on to Renfrew road-end to the start of the track. There were a number of cars already in the car park, but I assured everyone that they would be day trampers.  Rangiwahia Hut is posted as 2-3 hrs from the car park, so why would you stay overnight? I had also advised that we would not need our tents, but do take a sleeping mat in case. 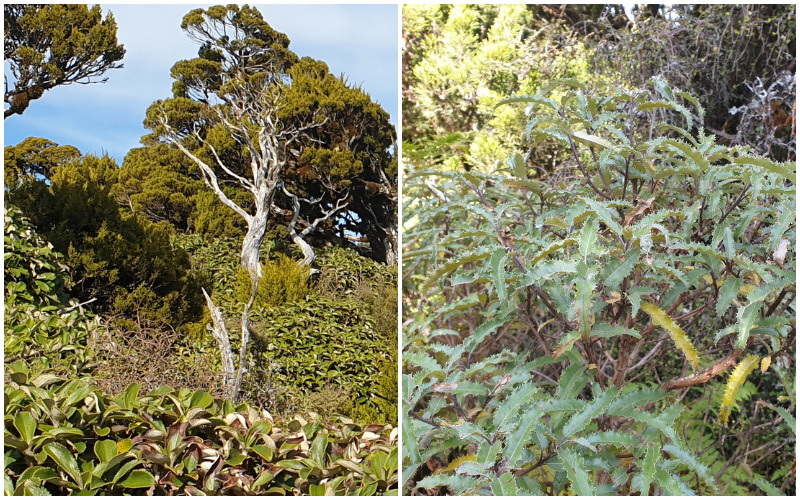 The Deadman’s Track is an easy climb, starting at 920m with the highpoint Mangahuia at 1583m, a small saddle and then up to the junction for the loop to Rangiwahia Hut (west) or to Triangle Hut (north-east).  Starting at 11am, I reached the signpost at 2pm. The track passes through glades of mountain cedar and when we emerged from the bush, Mt Ruapehu was visible, with lots of snow already.  At the junction, I took photos of the Whanahuia Range heading north, and the route to Maungamahue and then east to Te Hekenga. From there, many trampers head to Tiraha and then either over Sawtooth Ridge (north) or to Howletts Hut (south). 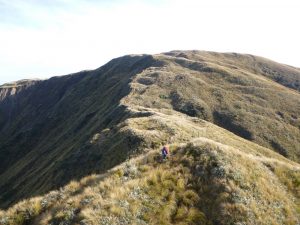 The small saddle before the junction on the Deadman’s Track

The ridgeline down to Triangle Hut is obvious, and across to the south-east, the highpoints Otumore, Tunupo and Toka were also clearly visible.

Heading down to the Rangiwahia Hut, I hoped that we would all be able to secure a bunk. This hope was dashed on arrival, with people everywhere. We had an inkling of this when we met trampers who had decided not to stay in Rangiwahia Hut, but continue on to Triangle Hut. All comments ‘it’s going to be cosy’ were borne out. The NTC party of six had all secured a bunk, but there were no more available by 1pm.

A party of young trampers on their Duke of Edinburgh Bronze final tramp arrived at 2pm.  With three teachers, they totalled 11. The hut has only 12 bunks and we discovered that they did not have sleeping mats or tents. They decided to stay and sleep on the floor, along with all the rest of us who arrived later in the day. Even more trampers arrived at 9pm. We counted 31 people sleeping in the hut, and a few tenting, totalling 37 visiting overnight.

It was crazy. On previous overnight stays in the hut, I had never seen it like this. 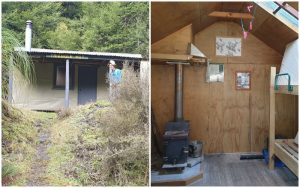 The following day, Geoff and I could not wait to get out of there. We headed back up the Deadman’s Track to the junction (1 hr), and then onto the Triangle Hut Track. After the tussock ridgeline, the track enters the bushline of leatherwood. The band of mountain cedar was clearly seen from above; a beautiful green, which stood out from the other bush.

The track is steep and was wet so we took care. We reached Triangle Hut at 11am, after leaving
Rangiwahia Hut at 8.10am.  Time for a break and relax on a bench on the porch. 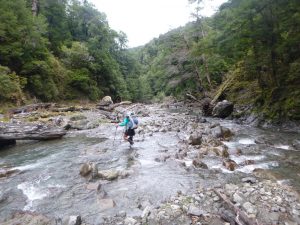 Heading down the Orua River valley

The next section was down the Orua River, in a valley that was a pleasure to walk through. After an hour, we came to the point where the track does an up 250m and down 250m back into the Orua River. A river crossing and sidle around a lovely waterfall before you reach the main river and then it was onto a track for 100m to Iron Gate Hut.

We secured the last mattress, and Geoff opted to sleep on the large, wide verandah. This proved to be a good decision, as once the wood burner was alight in the early evening the hut became very warm.  A good evening was had by us all, though (and no school party). 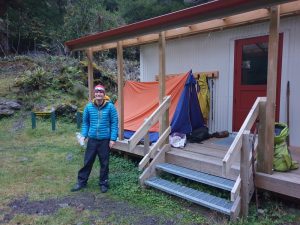 How’s this for shelter at Iron Gate Hut?

On our final day, we headed up to the Ngamoko Range; we had already arranged our pick-up at Moorcock Saddle (Kashmir road-end).  Whatever the weather, we would have to handle it.

On emerging from the leatherwood, we could not see more than 100m ahead, and the wind was strong. Still protected by the leatherwood, we kept going; however once out onto the tussock, we got blown about a bit. Geoff thought we might be on our hands and knees shortly.  On reaching the turn-off for the route to Top Gorge and Tunupo (south, but not signposted), we took a bearing and headed on it, 90 degrees. We soon passed the broken trig and reached the Otumore / Longview junction. Time for some more warm clothing and putting on the overtrousers. We had no more climbing to do and it was downhill from here. Some big holes, with deep mud at the bottom, are par for the course on this track. But I didn’t care, as the overtrousers took care of it. 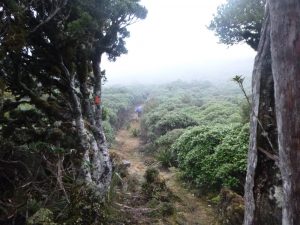 In the cloud above the bushline on the Ngamoko Range

We sped down to Pohangina Saddle and across to the Longview Track. We decided not to call in but continue down, reaching the road-end at 2pm (5hrs 50mins from our start time). The rain which we had not noticed in the north started falling at 2.20pm, but driver Brian arrived at 2.35pm. What wonderful timing…

Geoff and I were pleased that we had completed the crossover, dealt with the weather conditions, and enjoyed it.