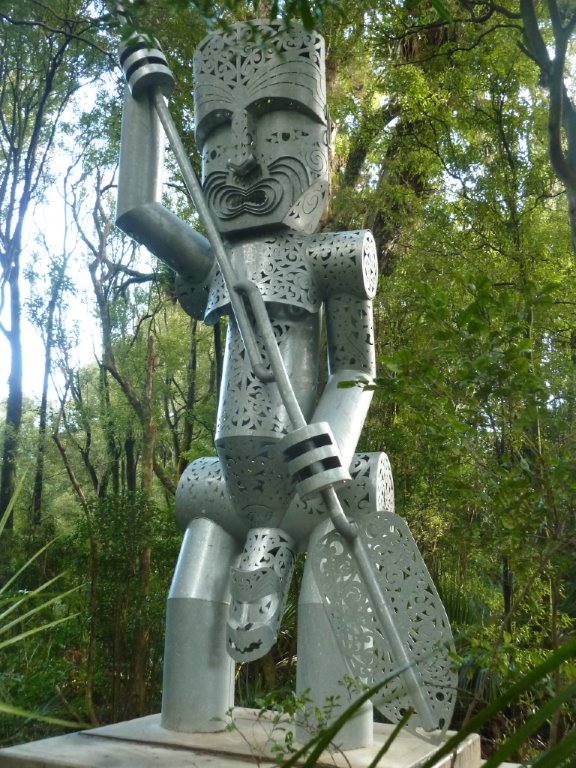 Manawatau Gorge, Wednesday June 18, 2014
It was an overcast day, fine for birds and for trampers. Sixteen of us left Church Road Winery and Peter Washington caught us up at the gorge. Heavy traffic and road works had hampered his way and he missed the van. 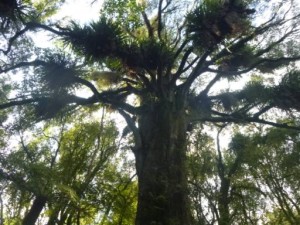 I’ve driven through the gorge a myriad of times and had always thought the gorge walk would be fun, with views of the river, and lots of scrubby gorse to walk through.. So I was very surprised to see giant kahikatea, matai, rimu and nikau lined the path. I didn’t see any gorse. The path was well made, with nice grades. For once, this was an easy tramp, though longer than expected, taking us 3.5 hours.

We did all the side trips to lookouts with views down to the road, river and out towards Ashhurst. There is now a new track down to an observation area overlooking the recent slip which closed the road for many months in 2012. Amazing that this was the largest road slip in New Zealand history. As the riverbed cuts deeper into the valley every year, so the slopes realign by eroding. That big slip will not be the last.

I’m not sure how Whatonga made it up there, but there he was, a huge sculpture made of steel greeting us about a third of the way. This was followed by the wind turbines, generating enough electricity to power Palmerston North.

We had lunch at the Bridge Café and were all home by 4.30.

Sparrowhawk bivvy, Ruahine Forest Park, Saturday 6 August 2022 Banner Photo: The view east, towards the Wakararas and beyond On a beautiful … END_OF_DOCUMENT_TOKEN_TO_BE_REPLACED

Prologue: The author was on the Whirinaki tramp, reported on this website under the headline 'We observe a mock turtle and the rodent of Upper Te … END_OF_DOCUMENT_TOKEN_TO_BE_REPLACED

Ruahine User Group A meeting was held on Monday 25 July, in the NZDA rooms in Dannevirke.  Julia … END_OF_DOCUMENT_TOKEN_TO_BE_REPLACED

Ruahine User Group A meeting was held on Monday 25 July, in the NZDA rooms in Dannevirke.  Julia … END_OF_DOCUMENT_TOKEN_TO_BE_REPLACED

Ruahine User Group A meeting was held on Monday 25 July, in the NZDA rooms in Dannevirke.  Julia … END_OF_DOCUMENT_TOKEN_TO_BE_REPLACED

Ruahine User Group A meeting was held on Monday 25 July, in the NZDA rooms in Dannevirke.  Julia … END_OF_DOCUMENT_TOKEN_TO_BE_REPLACED