Due to bad weather, access was denied for us to tramp as programmed on two Puketitiri farms, and Parks Peak area was chosen as the alternative.

It was with the knowledge that gale force winds were forecast and there had been considerable snowfall in all the ranges over the previous weeks that we set off down Highway 50 and onto Mangleton.

Nine trampers set off up the Sentry Box track, splitting into two parties as we climbed. John stayed to explore the bush lower down. 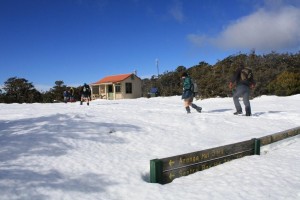 Two-thirds up the track, we reached the first snow. Further on, due to the heavy snowfall, bent and broken beech trees were encountered, with many forming obstructions across the track. Reaching the top of the track, we paused for refreshments beside the Aranga Hut – Sentry Box – Parks Peak junction sign.

The wind was a raging gale, rocking the trees, with many gusts heaving up the ground as the roots took the strain against the force. Considerable depths of snow covered the adjoining main range, making it a majestic sight.

Heading towards Parks Peak Hut, the track was covered with around 500mm of snow – making travel demanding – and it took us twice the normal time to get to the hut.

A new Parks Peak Hut was built 18 months ago and the old hut was removed. All that remains is the old dog kennel. The new eight-person hut is of a very good standard with sliding aluminium windows, plywood interior lining and a new log fire. It appears that DOC is putting some of the hut fees to good purpose.

A tramping guide, Graham Leech (Afoot.co.nz) arrived while we were having lunch, accompanied by his Labrador dog. He was in for the day to keep up his fitness.

The return journey was made much easier following our footprints in the snow. We arrived back to the van around 4 pm after meeting the challenges and having a great day.