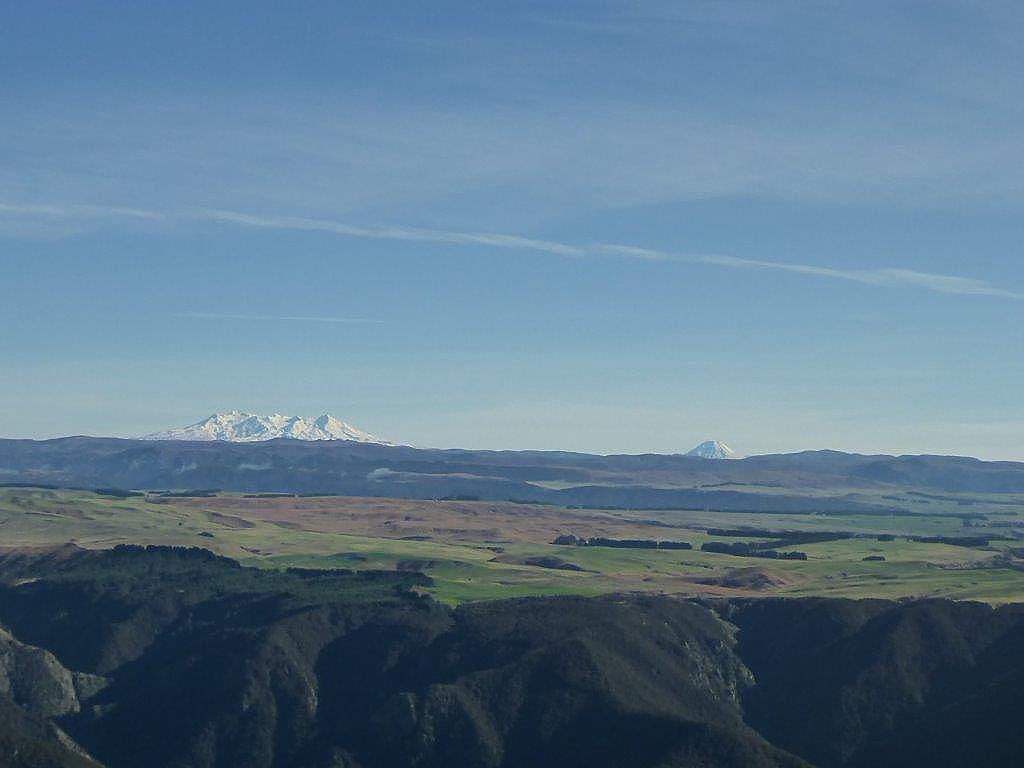 It was frosty driving up the Napier-Taihape road, over Gentle Annie, past the Comet Road turn-off and the entrance to Timahanga Station and on to the bridge over the Taruarau River. We parked the van and the car just across the bridge and began our walk at about 9am. It was cold.

With kind permission from the landowners, we climbed over a fence and followed a very good but steep track up to the tops. Twelve decided to go “all the way”, and four took it a little easier.

Gradually the track became less steep and the bush opened up. The sky was crystal clear and the first glimpse of Ruapehu had everyone in awe. But then came the second glimpse, and the third, and Ngauruhoe joined in. In short, views galore. 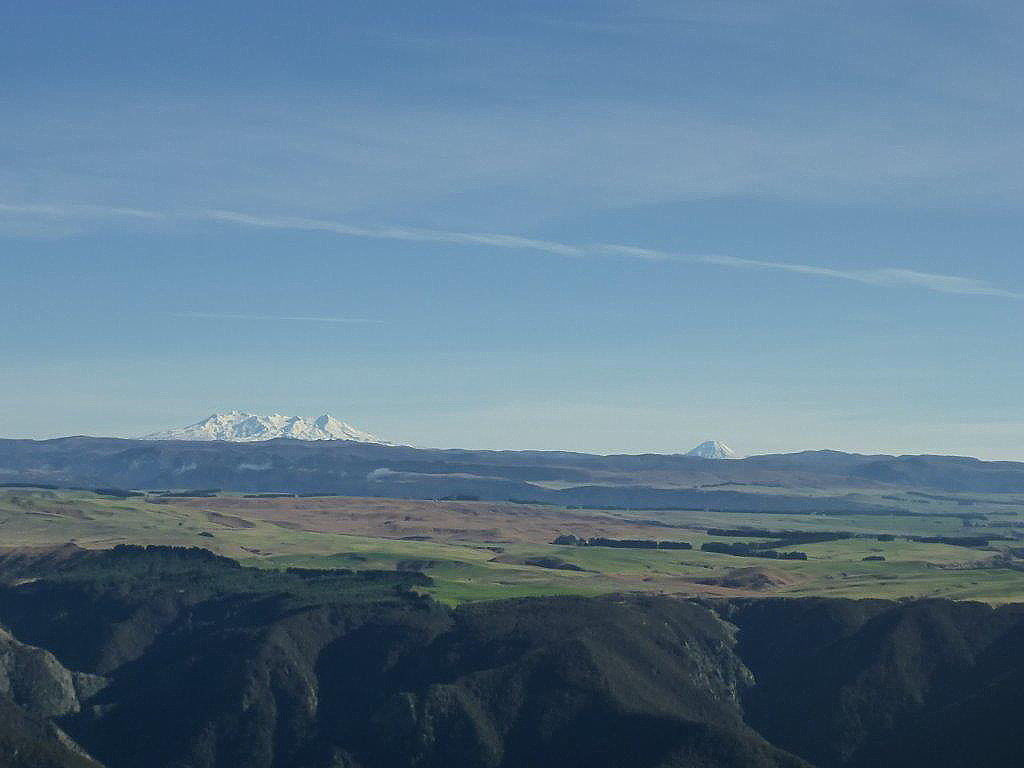 After an hour and almost 400m of climbing, we reached a trig point (989m), which gave us views not only towards Ruapehu but on to Timahanga Station and the Kawekas – and a perfect spot for morning tea.

From here, we followed the ridge for another 75 minutes, still on a remarkably good and clear track. There were a few ups and downs, leading via our highest point of the day (1165m) to the final high point, which let us clearly identify the Comet range, the northern part of the Ruahine Range with Ruahine Corner in the distance, the Taruarau River in the gorge-like valley below us, as well as Otupae.

Some of us had been on the previous Sparrowhawk Range tramp but had been blown off by gale-force winds, so they were delighted to be able to go the whole way this time. 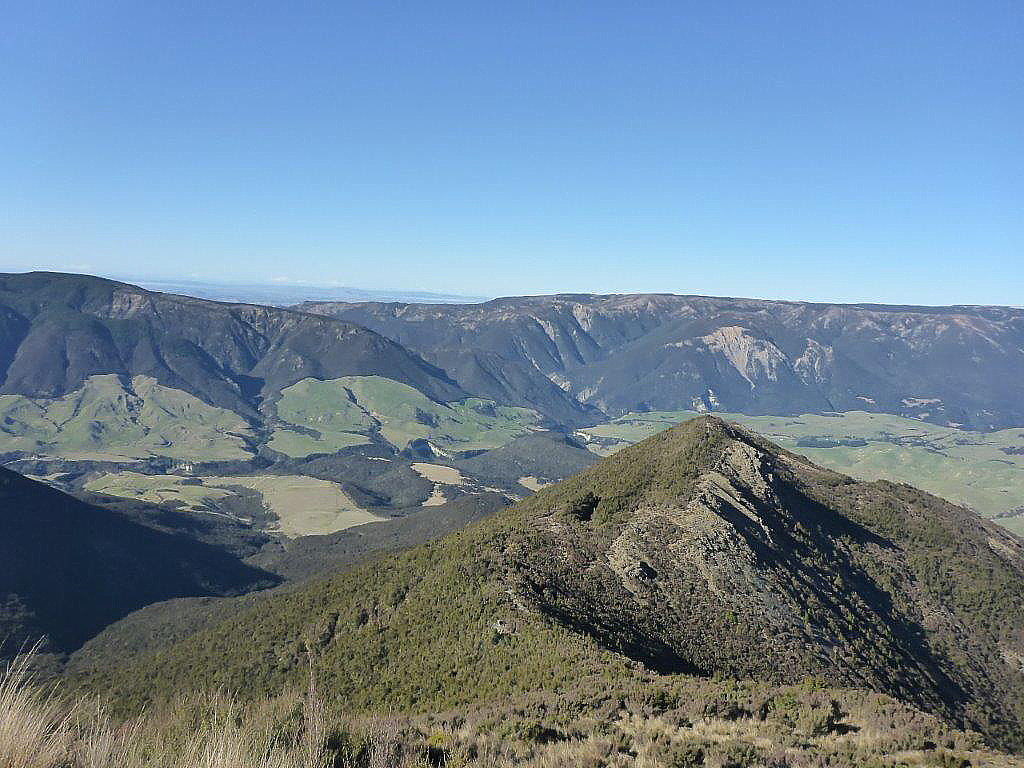 … and our view to the eastern ranges and the Bay

However, there was still a cold breeze and we needed somewhere out of the wind for lunch. Seven ladies found a nearby spot, but the five others made their way back for another 15 minutes or so before having lunch. In the sun and out of the wind, it was just perfect.

Lunch was fairly early and just after noon we were on our way back again, taking only 1hr 40 mins to get back to the van. The four who did not come the whole way had made it to the trig and still been able to enjoy the majestic views.

Sparrowhawk bivvy, Ruahine Forest Park, Saturday 6 August 2022 Banner Photo: The view east, towards the Wakararas and beyond On a beautiful … END_OF_DOCUMENT_TOKEN_TO_BE_REPLACED

Prologue: The author was on the Whirinaki tramp, reported on this website under the headline 'We observe a mock turtle and the rodent of Upper Te … END_OF_DOCUMENT_TOKEN_TO_BE_REPLACED

Ruahine User Group A meeting was held on Monday 25 July, in the NZDA rooms in Dannevirke.  Julia … END_OF_DOCUMENT_TOKEN_TO_BE_REPLACED

Ruahine User Group A meeting was held on Monday 25 July, in the NZDA rooms in Dannevirke.  Julia … END_OF_DOCUMENT_TOKEN_TO_BE_REPLACED

Ruahine User Group A meeting was held on Monday 25 July, in the NZDA rooms in Dannevirke.  Julia … END_OF_DOCUMENT_TOKEN_TO_BE_REPLACED

Ruahine User Group A meeting was held on Monday 25 July, in the NZDA rooms in Dannevirke.  Julia … END_OF_DOCUMENT_TOKEN_TO_BE_REPLACED