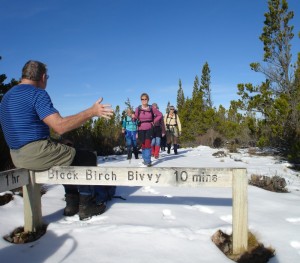 Gossy’s summary says it all – we were down to Plan D on a middling grey day that looked as if it could clag in. Shame about the padlock and ford, but Alison pointed the van optimistically at Lotkow Road and by the time we got there, half of us wished we could just keep driving. Instead, we girded our loins, pointed ourselves uphill and started the grunt to the top. No snow and ice on the way but plenty once we reached the ridge. By then, we were in a winter wonderland with ranks of snowy peaks marching west as far as the eye could see. At every vantage point we all took the same photos, but can you blame us – the scenery was dazzling. 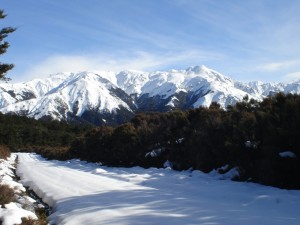 Following the ridge along was pretty straightforward though the snow was deep enough for us to stick pretty closely to each other’s hoofprints. I was ready for morning tea long before we had it, and the same went for lunch. At Black Birch Bivvy, some of us detoured downhill to clap eyes on the actual hut, while others waited on the track until we were sick of taking photos. Gossy’s pics are the best – the bivvy was in pristine condition and looked quite cosy in all that snow, but maybe that’s just the colour orange for you. The sun was out by now and there wasn’t a breath of wind – perfect conditions for a winter tramp. So much for the forecast.

Eventually, we came to lots of ice and melt-water but most of us kept our feet dry by sticking to the edge of the track. No one fell in and got totalled. Just before the car park where we had lunch, there was a stream to jump and a small hill of attractive bush. Alison kept saying “Almost there, almost there,” so I guess I wasn’t the only one who looked hungry. The advance party had already cleared the picnic table, but the one in the shade looked surreal with its thick quilt of snow.

We took a group photo of the occasion then headed back the way we’d come. Pinus contorta, pinus contorta and more pinus contorta, but also an amazing view of Cook’s Horn wearing a snow cap. Again we all took the same photos then headed downhill. It didn’t seem nearly as far on the way back – I wonder why that is? Ted drove the Toyota home and everyone pointed out its defects compared with the 4-wheel drive (which wasn’t available), but it seemed OK to me. We reached Napier about 5pm.