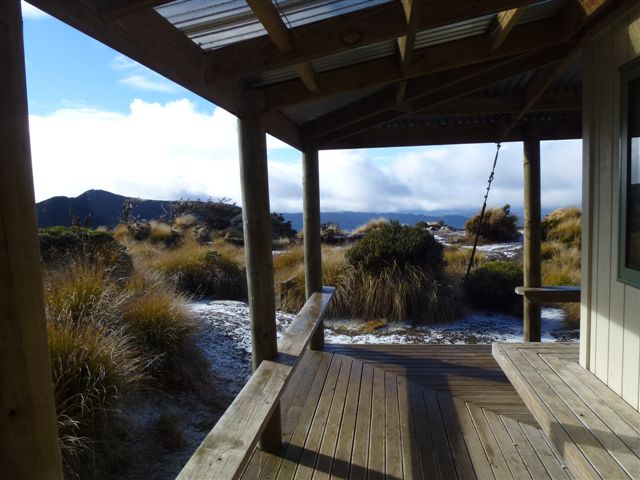 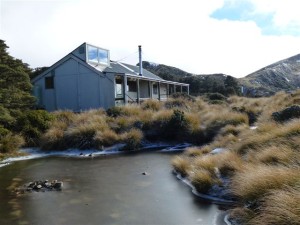 Sunrise Hut, but no reflections this time

The weather forecast was for gale-force southerlies and snow down to 700 metres. So it was with a sense of excitement and trepidation that we set off from Napier for the Triplex car park. What a waste of emotional energy. The wind never came; the snow did – but only soft, fluffy stuff that did not settle. All my imagined dramatic photos evaporated and the trip reverted to just a tramp up to Sunrise Hut in very good winter conditions. 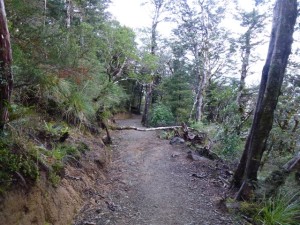 The only treefall on the whole track

Boots were unnecessary. Slippers probably would have been enough. Ten of us set off up the hill, well-dressed for the cold, but not in rain gear. The track was in perfect condition with DoC men still primping it on the day. There was one small tree trunk across the track, so we could only give them nine out of ten.

We soon split into self-appointed, speed-based groups. Some ventured a little past the hut but only briefly so there was very little “Beyond“ involved. An early lunch was partaken and as it was cold in the hut, an early start was made back down the track.

The forest was alive with bird call, which is not always the case. Maybe it was the abundant ripe orange coprosma berries.We even had some very close encounters with wood pigeon, tuis and two robins on the track.
The weather eventually broke, with solid rain in the afternoon – but not until we were through the last gate on our way home. We’d had our tramp in the right part of the day.

Sparrowhawk bivvy, Ruahine Forest Park, Saturday 6 August 2022 Banner Photo: The view east, towards the Wakararas and beyond On a beautiful … END_OF_DOCUMENT_TOKEN_TO_BE_REPLACED

Prologue: The author was on the Whirinaki tramp, reported on this website under the headline 'We observe a mock turtle and the rodent of Upper Te … END_OF_DOCUMENT_TOKEN_TO_BE_REPLACED

Ruahine User Group A meeting was held on Monday 25 July, in the NZDA rooms in Dannevirke.  Julia … END_OF_DOCUMENT_TOKEN_TO_BE_REPLACED

Ruahine User Group A meeting was held on Monday 25 July, in the NZDA rooms in Dannevirke.  Julia … END_OF_DOCUMENT_TOKEN_TO_BE_REPLACED

Ruahine User Group A meeting was held on Monday 25 July, in the NZDA rooms in Dannevirke.  Julia … END_OF_DOCUMENT_TOKEN_TO_BE_REPLACED

Ruahine User Group A meeting was held on Monday 25 July, in the NZDA rooms in Dannevirke.  Julia … END_OF_DOCUMENT_TOKEN_TO_BE_REPLACED