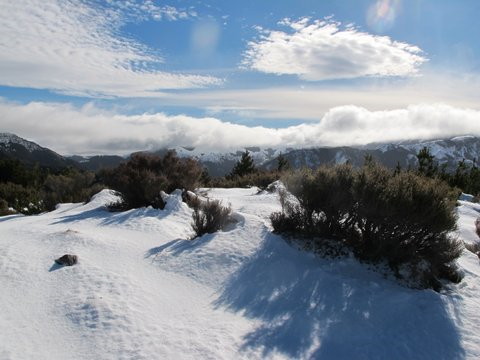 The Metro Express, with pilot Ken Ross guiding, made its way up the Napier-Taihape road. The weather was fine and reasonably clear, and the only hazard on the way were logging trucks which seemed to be going at road-hogging speeds – evidence of the extensive logging which is taking place in the area. 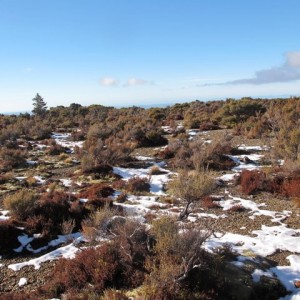 On arriving at the Cameron car-park-cum-camping area at Kuripapango, we climbed out, organised ourselves and five of us set off up the track. Ken Ross, Vic Bullock and John Marshall kindly took the van around to the Lakes car park, where we would end our day’s tramp.

As we climbed through the scrubby surrounds, we had excellent views of the river below. The Russell Smith track used to be the usual way to climb up to the radio masts and provides a very direct route there.

As the five of us climbed, we said goodbye to Julia as she shot ahead. The wind was reaching gale force and only a few kmh short of blowing us off our feet. As a consequence, it was head gear and gloves on – and, for most of us, at least four layers of clothing. 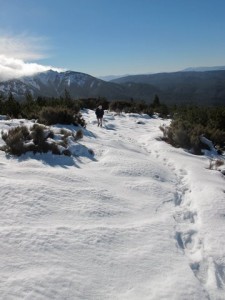 Around a third of the way to the top, we were faced with another factor which slowed us down: snow. An icy crust sat on snow which had drifted to about 40cms in depth. The feather-weights in the party were at a real advantage, as they stayed largely on the top of the snow, while others of us sank into it. On some of the narrow sections, sited above significantly steep slopes, it made for some interesting negotiating, especially for Wai, who had not faced such challenges before.

By 11 o’clock, we were at the top, where we found Julia waiting, and sat down for some refreshments before pressing on over a brief climb before beginning the descent down to the Lakes car park. Within 100m from the top, we came across Ken and Vic who had made a creditable climb up the other way. The group then all gathered in a relatively sheltered spot in sun and snow and had lunch.

Back at the van, we came across John Marshall who had amused himself around the lakes. Refreshed and changed, we sat back as Sue Martin drove us to Napier, arriving home by 2.30pm after a short but enjoyable day. 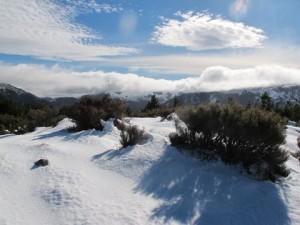