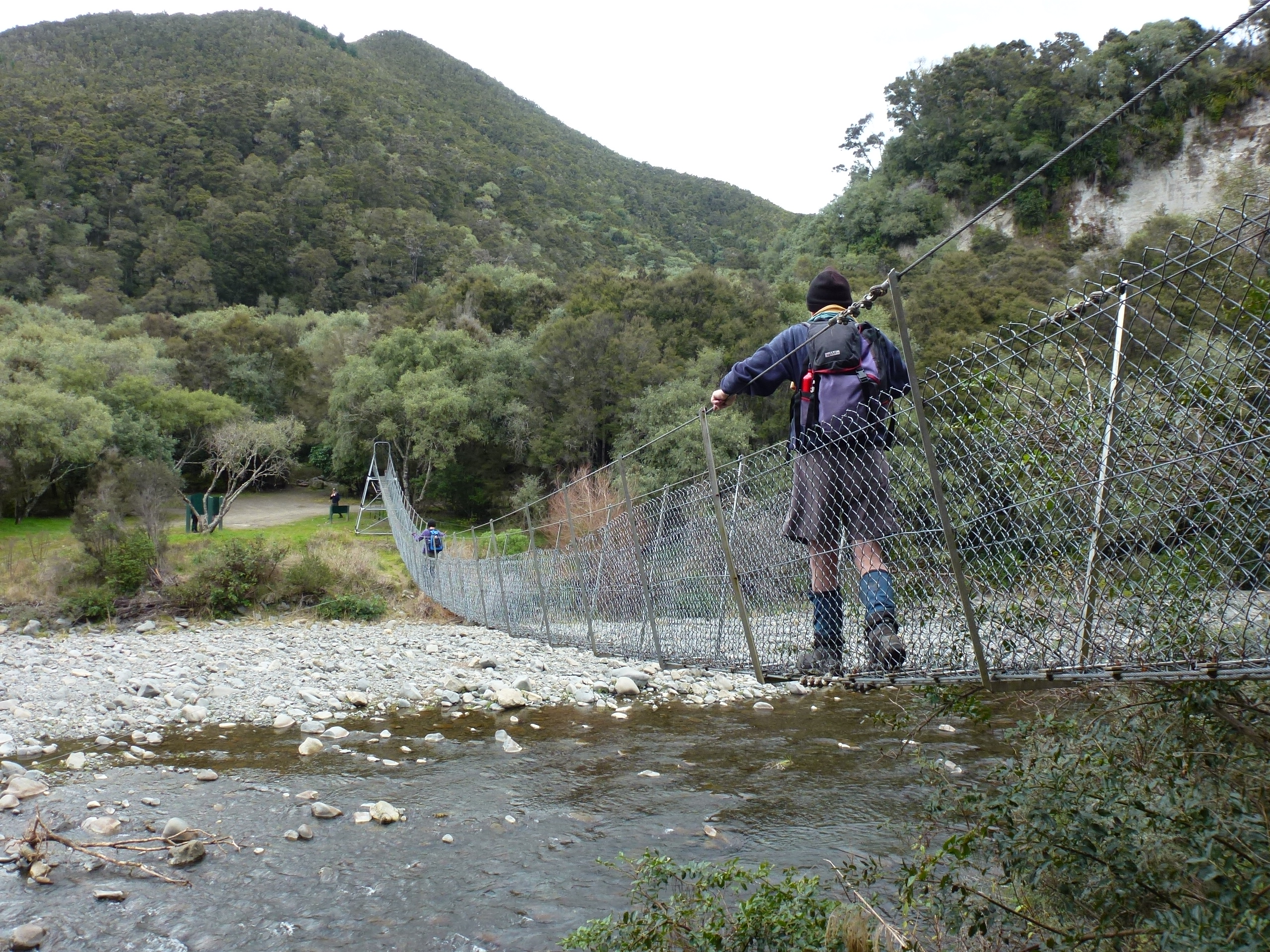 A late change in plan had us do this trip in reverse order from the planned outing. We started from the Lawrence Road end off the Taihape Road. It was a good idea, as it reduced the driving time and we had the downhill section on the way home. Ten of us set off from the Lawrence shelter, the new one that looks like a bus stop with a toilet attached. The weather was mild with high cloud, good for us but later views to the Kawekas made us glad we had again picked a sheltered trip for this time of the year. 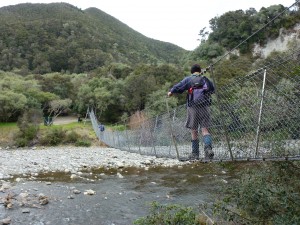 Once over the swing bridge, the track goes steadily up (although the net climb is only about 500 metres). It was in good condition generally, broad and open. There were many small hoofprints along the track and two Sika deer were spotted.

This is not a long trip and the main party of seven was at the Lotkow Road end well before lunch. After a brief look around, it was back down the track to find a good spot for lunch. No thought was given to taking the alternate route back as the track is overgrown and recent attempts to follow it have been unsuccessful.

The bush along this track is very distinctive with the canopy being kanuka without any of the normal forest trees protruding, nor are there any stumps indicating previous felling operations. The only big trees spotted were two at the north end of the swing bridge. The understorey was quite lush but seems to be limited in range. This area was apparently heavily grazed back in the early 1900s.

All trampers were back at the van by 3pm, giving time for coffee and a natter before heading home.

Sparrowhawk bivvy, Ruahine Forest Park, Saturday 6 August 2022 Banner Photo: The view east, towards the Wakararas and beyond On a beautiful … END_OF_DOCUMENT_TOKEN_TO_BE_REPLACED

Prologue: The author was on the Whirinaki tramp, reported on this website under the headline 'We observe a mock turtle and the rodent of Upper Te … END_OF_DOCUMENT_TOKEN_TO_BE_REPLACED

Ruahine User Group A meeting was held on Monday 25 July, in the NZDA rooms in Dannevirke.  Julia … END_OF_DOCUMENT_TOKEN_TO_BE_REPLACED

Ruahine User Group A meeting was held on Monday 25 July, in the NZDA rooms in Dannevirke.  Julia … END_OF_DOCUMENT_TOKEN_TO_BE_REPLACED

Ruahine User Group A meeting was held on Monday 25 July, in the NZDA rooms in Dannevirke.  Julia … END_OF_DOCUMENT_TOKEN_TO_BE_REPLACED

Ruahine User Group A meeting was held on Monday 25 July, in the NZDA rooms in Dannevirke.  Julia … END_OF_DOCUMENT_TOKEN_TO_BE_REPLACED