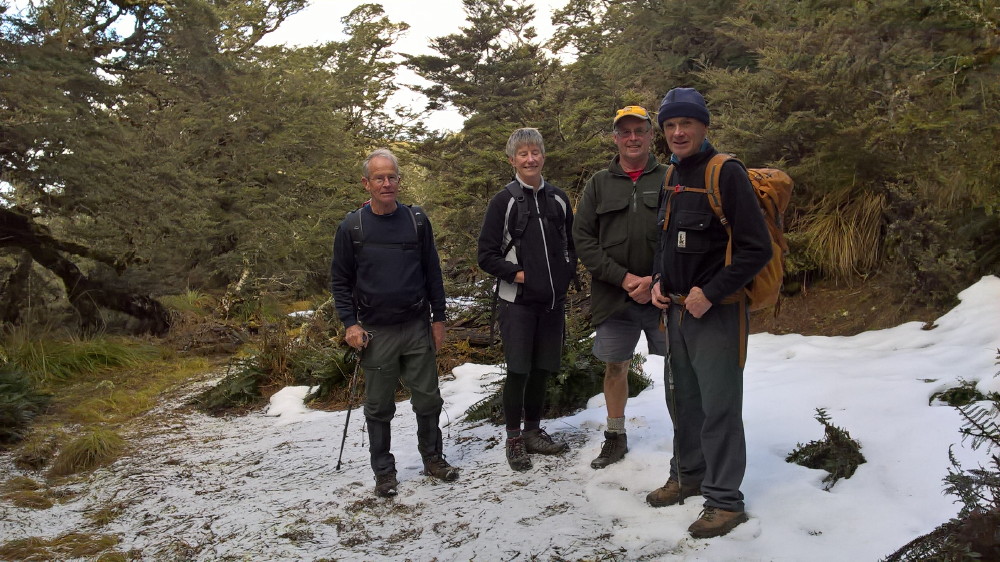 This trip was to have been to Poutaki Hut in the Wakarara Range. However, access to the conservation park from Wakarara road end has been denied.

Parks Peak in the Ruahine Range from Mangleton Rd was now our target. Thirteen of us took on the climb from Sentry Box, passing Rocky Knob to the junction at the top of the range near Pohautaha. The track up was hard going for most of us and particularly muddy after recent snow melt. At the exposed Rocky Knob, the wind was blustery and very cold. Layering up was necessary even though we were climbing through this section. 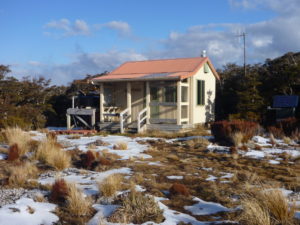 Five of us continued, passing the junction and over remnants of snow to Parks Peaks Hut for lunch. The temperature took a sudden drop and, on our way out, small frozen droplets blew off the trees, bouncing off our rain jackets in the blustery wind. The descent back was not as bad as it could have been. The wind, although cold, had dried the track out considerably and the slipping casualties were minimal.

This was a good winter 800m climb and a workout we all enjoyed.

Mackintosh Hut/Rogue Ridge, Kaweka FP, Saturday 17 September 2022 Banner Photo: The leaning sign at the top of Mackintosh Spur It was a sunny, … END_OF_DOCUMENT_TOKEN_TO_BE_REPLACED

Shine Falls, Local, Wednesday 7 September 2022 Banner Photo: Group selfie and the falls Nine of us set off on a very frosty morning from Park … END_OF_DOCUMENT_TOKEN_TO_BE_REPLACED

A-Frame to Stanfield Hut, Ruahine FP, Saturday 3 September 2022 Banner Photo: At the A-Frame Hut We had a full vanload booked to do this trip. … END_OF_DOCUMENT_TOKEN_TO_BE_REPLACED