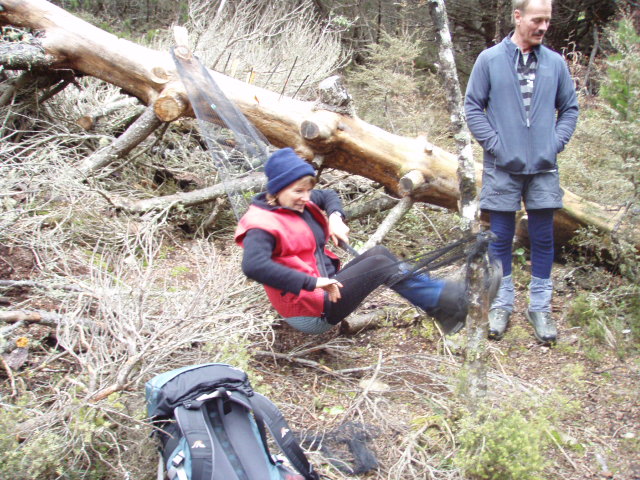 Black Birch Range: Did we see one?

The semi-independent authors in their ute caught up with the iTRAMP van at Rissington but after the second ford on Lotkow Road and only a kilometre to go, we came to a halt. Kelvin kindly walked all the way back to assist in changing a very flat tyre. 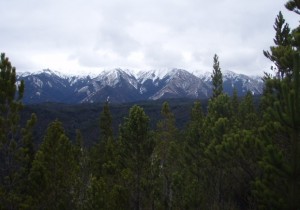 Most of the group waited for us, so it was up and away at 9.15. Up being the main event, pulling pinus contorta out by the roots as we went, some of it voluntary and some involuntary as we grabbed them to pull ourselves up the steep, slippery and seemingly never-ending climb.
A “there and back” trip, and the word has it that it is club tradition to start that end and not at Littles Clearing. “Just to make sure we wouldn’t pike out on that hill,” we grumbled. We got to the top in time to find the advance party who had fed and watered themselves and were starting to get cold. 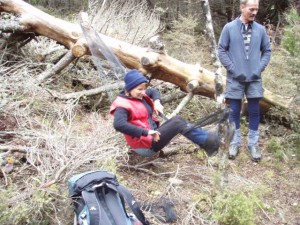 The pace was set through remnants of snow plus icy puddles until the next break as we went down to view the Black Birch Bivvy. It was in very good order, but broken arrows sticking out of some logs showed that someone had been there before us.
The view over to the main Kaweka range was somewhat obscured by passing clouds and these only added to the cold and bleak appearance of the snow-covered terrain towards Kaweka J.

Onwards and mainly downwards (bad news here, as return would be upwards) until we reached Littles Clearing for lunch. There were picnic tables, no less, with some weak sun breaking through the clouds to warm us up. But as we finished lunch, that departed, and so did we.

The return journey featured a very fast pace set by the front “runners” who just had to wait for the others at the van as a reward for their effort. We caught them in various stages of undress as we dropped down the last part of the track, thigh muscles quivering and eyes widening in shock at the sight of cold, white, semi-naked bodies.

Overall, it was an enjoyable, short but fast tramp and an uneventful road trip home. The timing was great: windscreen wipers were needed most of the way. Ah, home to a hot shower and a lovely warm fire going before tea.