Rangiwahia Hut (or Rangi for short) sits in a hollow just above the bushline on the Whanahuia Range in the western Ruahines. The hut has extensive views over the western and lower North Island, taking in the volcanic plateau and the rugged hills and valleys of the Rangitikei district. 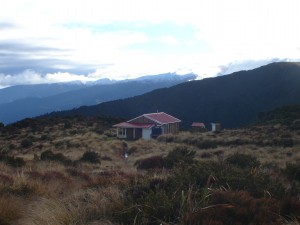 From the car park on Renfrew Road, the track sidles along a ridge through beech then podocarp forest before meeting a large slip. The track deviates up, around, then descends to join a main track just before a lovely arched, oriental-looking bridge. This spans a narrow chasm about 70 metres deep and is a great photo spot. From here, the track climbs (at times steeply) over a mixture of rocks, tree roots and zigzags, crosses below a small waterfall and then emerges onto a broad tussock ridge. The 12-bunk, serviced Rangiwahia Hut is then within sight and takes only a few moments more to reach.

Four of the group had taken this route, with three deciding to take the alternative Deadmans track route. This track starts from the car park but climbs up the ridge to the south. It’s well marked and leads up through beech, podocarp, and hardwood forest with the fabulous mountain cedar making an appearance.

Climbing steeply at first, the track flattens out before climbing again at a gentler gradient through a corridor of sub-alpine scrub and leatherwood. On reaching the open tussock, you can look across the valley and see the ridge that leads down to Rangiwahia Hut. For us, it was time to put on extra layers as the wind was cool and the predicted weather change was on its way. Snow lay between the tussock and got deeper the higher you went, making the going much harder. We had a very quick lunch by the tarn, checked the map for our position, and more layers were put on before the last ascent to the signpost on Mangahuia at 1583m, the high point of the day. We seemed to have steered clear of the dark clouds all day. 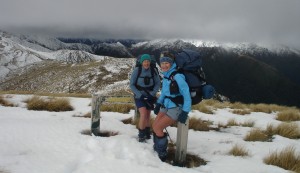 Photos were swiftly taken of some great views, as it was too cold to linger; then it was down the poled, snow-covered ridge trying to keep to the clumps of tussock for better footing. Les was going like a bat out of hell, as he was very cold. We all managed to fall over at some stage, with one or two full face-plants thrown in. We could see in the distance three members of the other group who had come up to meet us and were watching our progress. We met up and they were impressed that it had only taken four hours to do the loop. 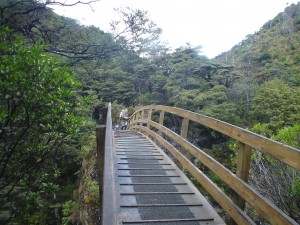 With the weather closing in, we made our way down to the hut where the gas heater was going and the kettle was on. That night, we shared the hut with four women from Wellington and in the morning had an uneventful walk out to the car park.