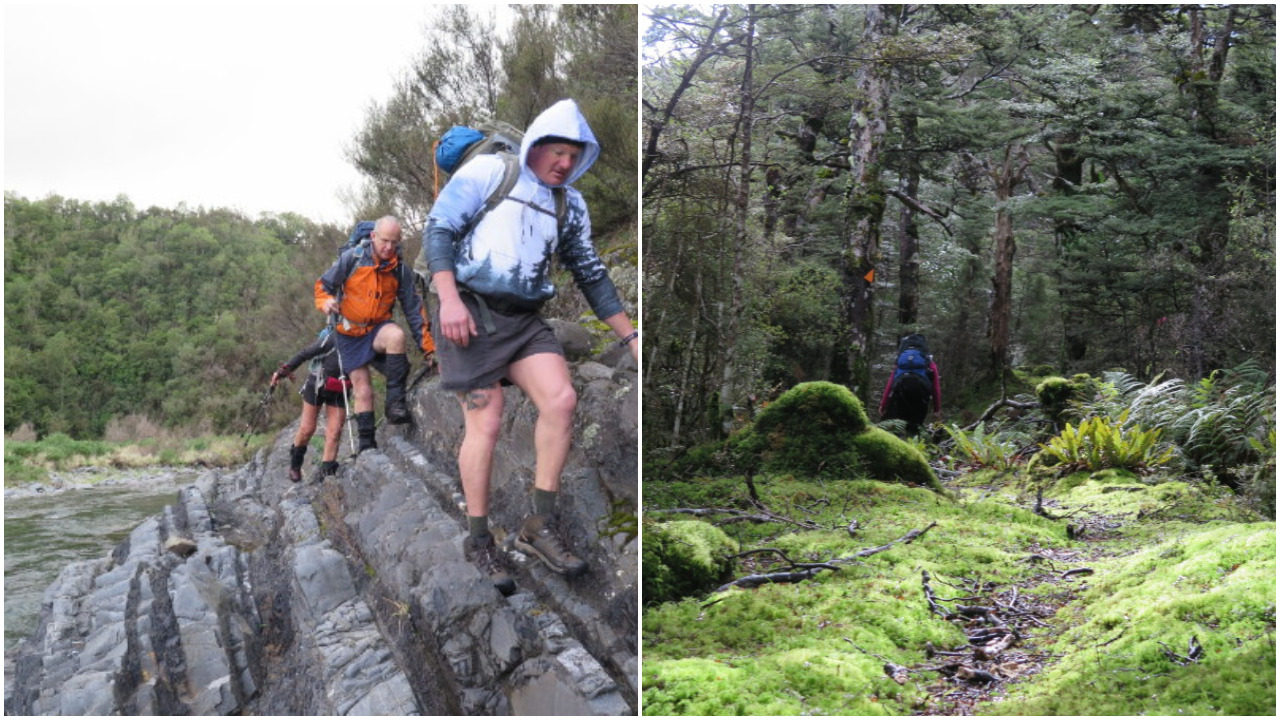 There was no van, due to Covid restrictions, so some cars left Napier and joined others at Maraekakaho – 17 trampers in all, five of whom were staying overnight and 12 on the day trip.

We drove to the end of Mill Road, having gained permission from the farmer. Lots of leaves budding on the willows and wee lambs skipping in the paddocks were just gorgeous.

The air was quite cool when we arrived; the Bay forecast was 22C but it definitely was not for us! 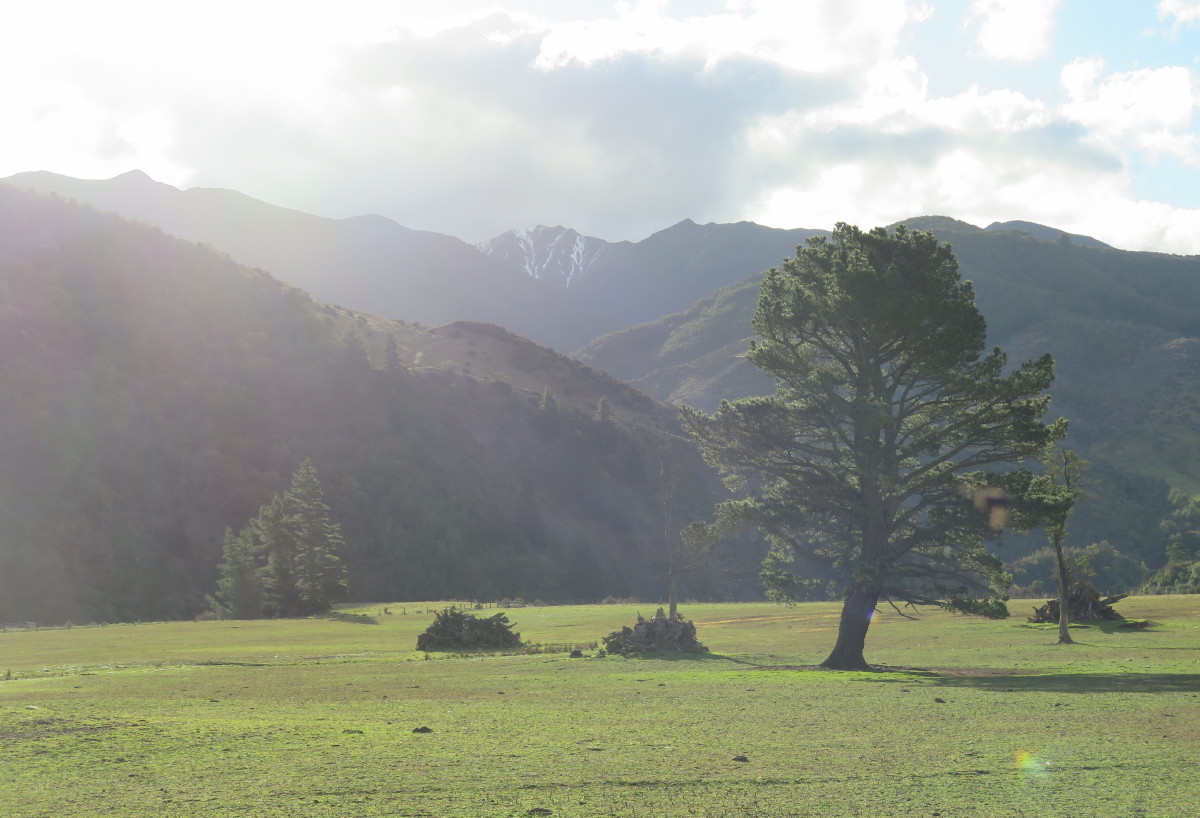 Heading for the hills

With boots on, we left just before 9am, over the fence across the paddock holding some grand black cattle. Down to the Moorcock Stream, and then we headed about 20 minutes downstream and crossed to the Tukituki River. The river was quite fast-flowing, not warm, and well over our knees! Most crossed over solo but a few had an extra hand, especially helping our new, less-experienced members who we’re delighted to welcome.

From there, it was a very steep, muddy climb, a clamber and lots of pulling up for about 10 minutes. Then a barbed wire fence which was just at the wrong height! Two members gave others a helping hand and no-one was damaged. We came out into farmland again, and very steep. It can’t be easy to farm such slopes; hats off to the farmer.

We entered the forest park, stopping for morning tea before starting the two-hour trek to the hut. A fabulous track, very well maintained, mostly up, lots of moss in places looking like a scene out of Lord of the Rings, other places more open. With 17 of us, we arranged to meet at the junction signposted to the airstrip, to ensure we were all together. It was then a short walk to the hut for lunch. At 1050m and with snow in sight, the air was quite chilly, so lunch took about 20 minutes as we started to get cold.

We left our five friends (Julia, Lynette, Matt, Fiona and Mark) at the hut for their overnight and headed back.

On the way, two of us spotted a cross for an old friend, Jim Stove, who passed away on this track several years ago. 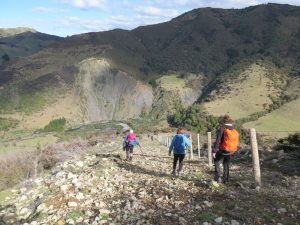 Heading back down the steep fenceline

As we headed down, the sun came out and we all had to take off a layer. The sun was lovely when back on the farmland, heading down the steep hill. We followed the fence down this time. It was very steep, with loose rocks. Then back to our old friend, the barbed wire! Much hilarity trying to get everyone over unscathed! On the steepest part, we were literally swinging off the roots to get down. 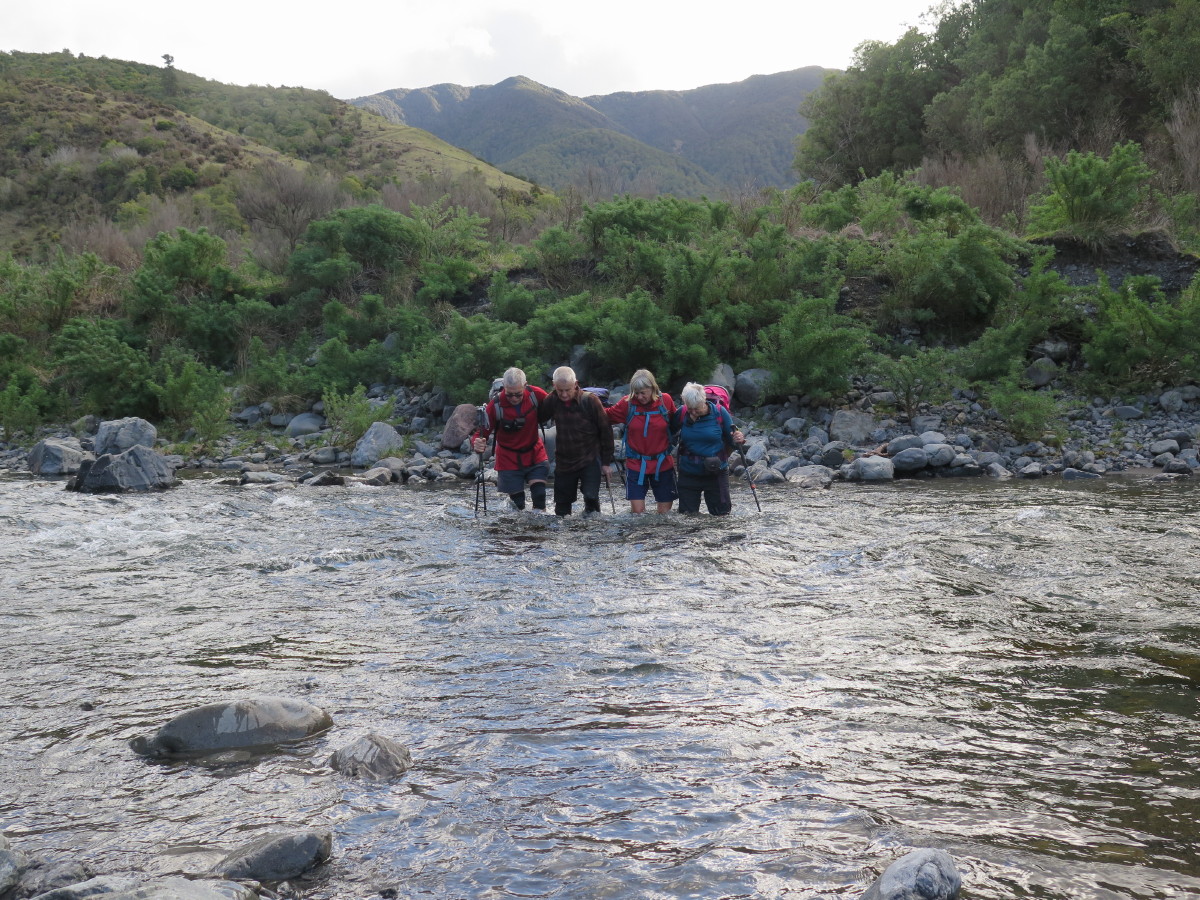 One of the prescribed ways of river crossing

At the river, we crossed four at a time. This was somewhere between educational and hilarious. When all were safely over, we decided to practise some bush skills and river crossing, especially for our new members.

Then it was out of the Tukituki River, back through to the Moorcock Stream, up the steep hill again, and across to the cars.

We finished at 3.30pm after a good six-hour tramp. Lovely and warm in the sunshine and lots of happy faces. A great day out had by all.

Aranga Hut On Saturday 14 January the tramp was changed to a loop in the Northern Ruahine Range. … END_OF_DOCUMENT_TOKEN_TO_BE_REPLACED

Aranga Hut On Saturday 14 January the tramp was changed to a loop in the Northern Ruahine Range. … END_OF_DOCUMENT_TOKEN_TO_BE_REPLACED