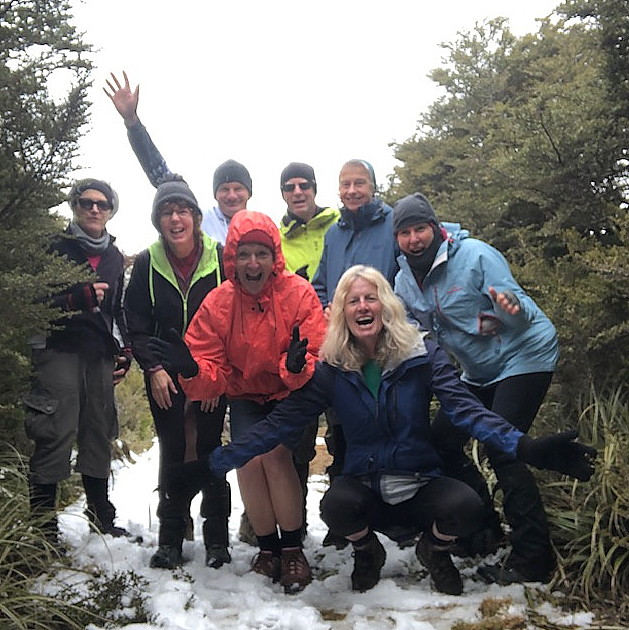 From Masters Shelter to the Park’s Peak Ridge, Ruahine FP, Saturday 5 September 2020, Map: BK37
Banner Pix: We all made it to the main range junction

One car left from Park Island with three trampers and joined another with three more on the way, at Maraekakaho. Elly and Gerard left with one car from Waipawa. All eight of us met on Mangleton Road at the gate towards the 1.2km drive to Masters Shelter. Everyone was keen to get to the Park’s Peak Ridge and try to explore the ridge either north towards the trig point, weather permitting, or towards the south to Aranga Hut if the wind on the ridge was too strong. Apart from Elly and Gerard, none of the others had done this track. We left Masters Shelter at 8.20am. 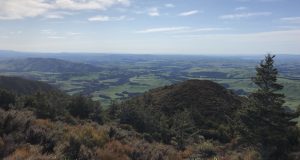 The view back towards the Mangleton Valley

The start of the track up the Golden Crown Ridge was as steep as always, but in good condition. Recently it had obviously been cleared by some kind people. We made steady progress. Because for most of us this was new, we had agreed at the start that we would stick together. We also had four PLBs amongst us, so were well covered with safety equipment. On the way up, the wind started to pick up, and we were glad from time to time to find some shelter. We could also see the clouds starting to gather at the tops. Three of us got ahead, arriving at the ridge first.

In the last 500m or so, we ended up in a bit of snow on the track. Nothing to make the walking difficult or dangerous, just a great experience for those of us who had their first snow tramping. At around 10.30am, the first group arrived at the ridge sign where we would have to decide which way to go next. It was freezing cold at the top and we wrapped up well to wait for the others. At 10.50, the rest arrived at the ridge. 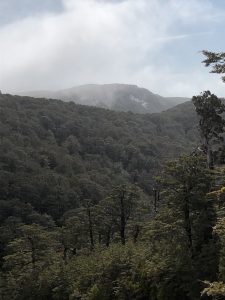 The clouds gathering over the top of the main range

We could see the clouds racing over the ridge a bit further up. A few of us went to try out whether it was an option to go that way, as originally planned. But it did not take long to decide that that was not an option at all. The wind was blowing hard, the temperature was near-freezing, clouds were whizzing by, and the wind chill factor was strong.

We discussed going the other way to Aranga Hut, which would be another hour each way. Some of us were going to turn around, because they were too tired to go further. After some discussion, and looking at the worsening weather, we decided to all turn around. This meant we had morning tea and lunch at the sign at the top of the Crown Ridge and then turned back. 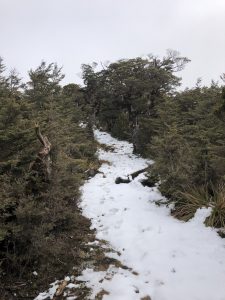 Snow on the open sections above the bushline

The way down was slightly more hazardous than up, because the wind had picked up considerably and we had to crouch down at a few places and wait for a lull, to be able to pass. This was an excellent learning experience for those of who were relatively new to tramping and had not experienced wind of this magnitude. It also confirmed that we had made the right decision to turn around.

At 1.15pm, we were back at Masters Shelter. After a snack and a refresher, we headed home. On the way, we could see that dark clouds had enveloped the tops and rain was falling.

Even though we had not been able to reach our planned goal, it was a nice walk up the hill with a nice group of people. And a great experience for those who had not done this route or been out in this kind of weather.

Aranga Hut On Saturday 14 January the tramp was changed to a loop in the Northern Ruahine Range. … END_OF_DOCUMENT_TOKEN_TO_BE_REPLACED

Aranga Hut On Saturday 14 January the tramp was changed to a loop in the Northern Ruahine Range. … END_OF_DOCUMENT_TOKEN_TO_BE_REPLACED