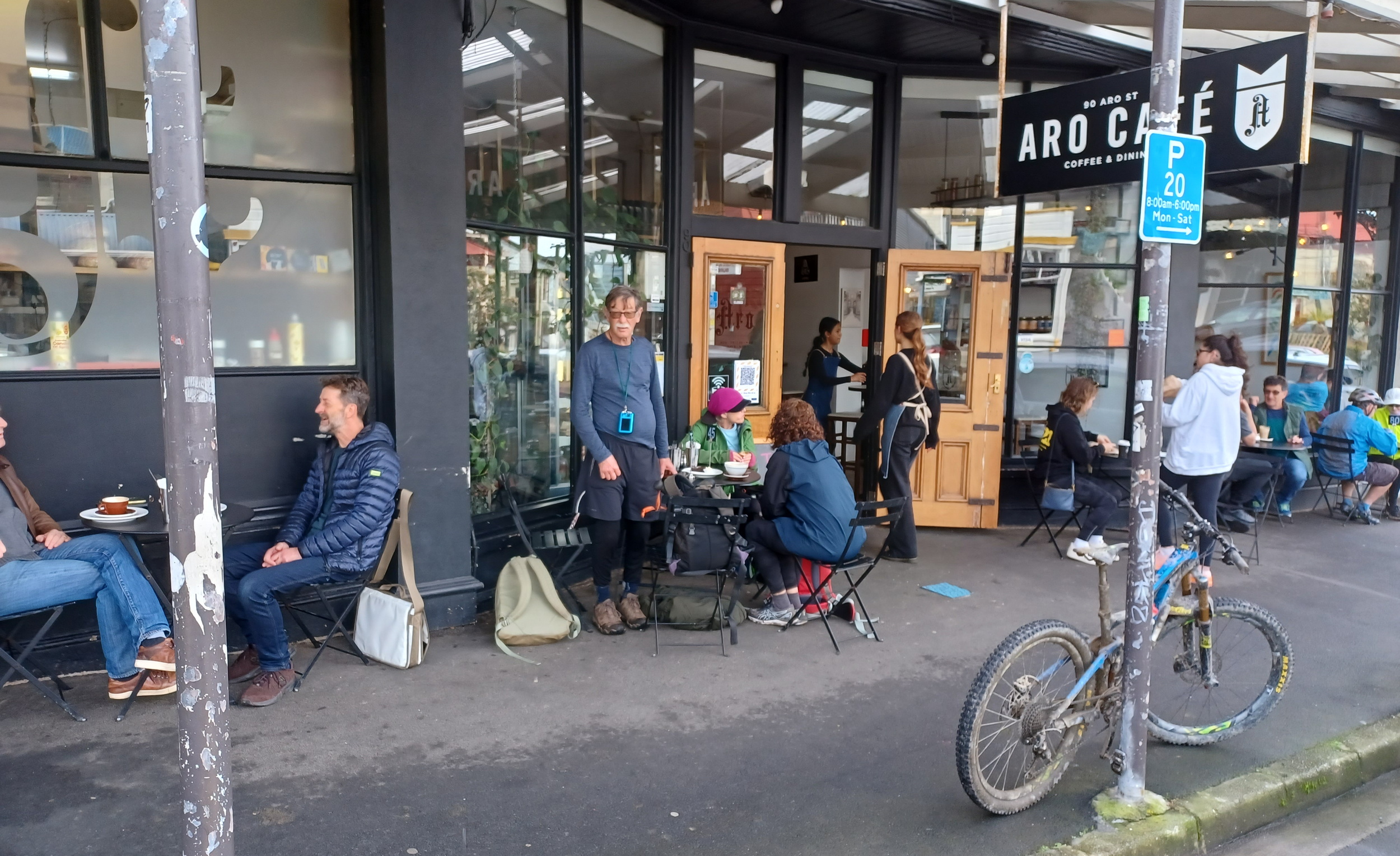 Banner Photo: This is what urban tramping is all about. The headline is not a typo. It means sophisticated, refined, cultured.
Wellington and environs, Fri/Sat/Sun 23/24/25 September 2022

With six sleeps to go, the forecast for our “trip of a lifetime” to Wellington was heavy rain and strong southerlies. So the organiser appealed for assistance in that praying to the weather gods might help if we all do it. It worked, because from then on it slowly improved. 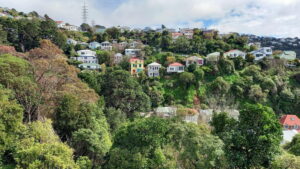 Fifteen were booked into the Lodge at Paekakariki Motor Camp on the edge of QE2 Park (will this be renamed KC3 Park?). Unfortunately, Lynette was buried in hail stones at her home and couldn’t join us (she probably did too much praying and got the backlash).

Then on Friday, Fiona pulled out because of a food reaction, they think from fish. Instead of heading to Wellington for work and then joining us at the camp, she was at Levin and heading home for treatment.

So it was 13 who travelled on Friday afternoon to Paekak. Several went for a beach walk in the sunshine in the late afternoon.

Dinner that night was at Finns Restaurant in Paekak Village. What a difference the Gully Road has made. Paekakariki (and Pukerua Bay) have become backwater communities. We had excellent food but slow service.

Saturday morning was the train ride to Wellington. Free for Gold Card holders and $10 for a whole day Rover ticket including buses.

Heavy rain woke me from a pleasant slumber at 4 am in Paekakariki; but it had abated by the time we boarded our train to the Capital. After passing along the coastline, our view of the South Island was hidden beneath some springtime rain. Then, after a few tunnels, we reached Wellington.

All wrapped up and donning wet weather gear, eager trampers filed past the Beehive to start the walk at the entrance to Bolton Street Memorial Park. I saw some very old headstones, so close to the motorway and high buildings. 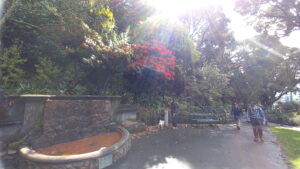 Rhododendrons in flower in the Botanic Gardens

The fine drizzle cleared as we climbed through the lush Botanic Gardens. Just before we reached the observatories and cable car, we were greeted by a few talkative kakas flocking in the trees above. What a fantastic sight in the middle of the city.

Routing past parts of Victoria University we went on to the Aro Valley, to rest our slightly weary legs and have a little snack. Moving on, Doug pointed out his old flat from university days.

I hadn’t realised how many green areas there are in Wellington. We climbed all the possible little hills on our City to Sea walk, with many great vistas.

As we got closer to the coast, the wind got stronger but luckily the rain held off.

The view of Island Bay was fantastic. Houses nearby showed the wear and tear of living near the coast.

To our great relief, a double decker bus was waiting for us at the finishing line. 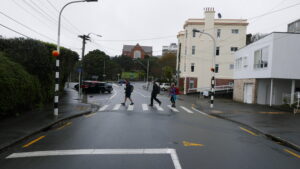 On the way through Newtown, a young Waikato supporter and his girlfriend boarded the bus. They were headed for the Cake Tin to win the Ranfurly Shield from Wellington, Yeah right. We enjoyed ribbing him about his chances and he enjoyed ribbing us about losing the Shield to Wellington the previous week.

What an awesome walk that Kelvin organised and thanks to those who prayed for a clear day. Special thanks also to the drivers and Kath who joined in our city adventure. This is a highly recommended walk: 14.5 km and 5.5 hours. Several commented that it was a lot tougher than they had anticipated.

Twelve completed the walk. Di’s husband Jeff decided to do other things.

Dinner that evening was at the Fisherman’s Table Restaurant at the southern end of Paekariki Beach. The food was excellent as was the service.

The clocks had been put forward an hour and most of us knew a departure time from the lodge had been set for 8am. Therefore, it was a bit of a rush for those who still thought it was 9am! 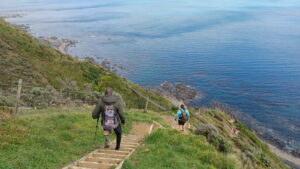 Simon has been everywhere, according to his backpack

Having left Kelvin and John at the lodge to do the departure housework, 11 set off from the Paekakariki railway station to complete the 10km Escarpment walk to Pukerua Bay.

After a stroll beside the railway line, a gateway off the footpath led us down a few steps, under the main road and onto the track.

It was a gentle climb to begin with, then up we went to the top. The weather was very kind, although it was still a case of shedding a layer of clothing and then wanting it back on. There were great views out to Kapiti Island, the South Island, back up towards Paraparaumu and down towards Wellington.

Our journey from the top took us down and up many wooden steps (1053 in total according to Cath, the official step counter) past many slips, across two swing bridges and up and down the hillside above the railway line. 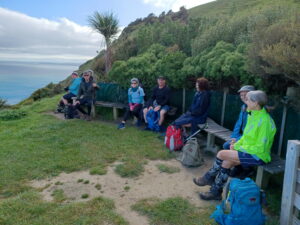 Time for a rest…

Sheep, tuis, wood pigeons and fantails were among the wild life noted along the way.

About three hours after we set off, we were met by Kelvin and John at the Pukerua Bay train station. We waited only 15 minutes for the $2 train ride back to Paekakariki.

This all but completed our weekend away, apart from a lunch stop at various cafes (depending on which vehicle you were in) and we were back home in Napier in time for dinner.

Thanks to Kelvin for organising a great weekend, including the weather!