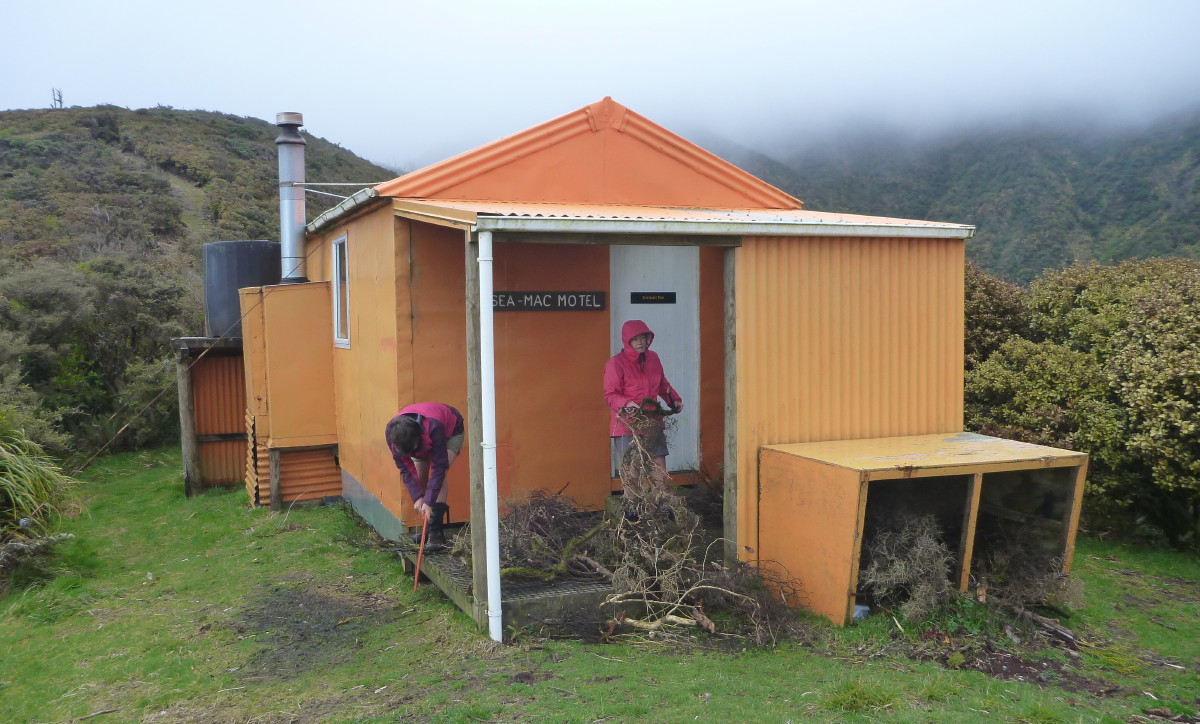 This tramp was cancelled in September, so three ladies put it back onto the list for an overnight over the Labour Weekend.

The start, from Kumeti road-end, is up the Mangapuaka Stream, but it did not begin well, with us all getting a slight dunking. I also tripped over a stone and and hit the ground. No damage done except to our pride and focus. 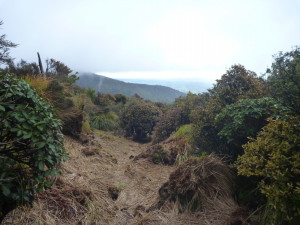 The stream was running a lot of water but was not dirty, so we decided to continue and soon reached the start of the track. The big orange triangle marker is visible on the true left of the stream, but the track is up a ridge on the true right. A steady climb, with the wind howling above the bush line, to just below the Matanginui high point (1074). The track has recently been cut, and is very wide. In the upper sections, leatherwood is the only plant that seems to be doing well, with pepper tree shrubs and scrub in between here and there.

From the tops junction, a gradual downhill sidle turns into a steep downhill. We took this carefully, as it was slippery due to recent rain.

On reaching the bottom where the track crosses the Oruakeretaki Stream, we crossed safely a few metres upstream from the usual crossing as there was a lot of water thundering down. The DoC track up to Kiritaki Hut is about 50m downstream and further crossings were required, but we decided to tackle the slip which is near the first stream crossing on the true right. Last time (July 2011), Ted had found a track that went straight up after crossing the slip, and it intersected with the official DoC track.

So we tackled the slip and then inched and climbed our way above it. Good upper body strength was required to haul ourselves up. Once we reached the bushline, the trees offered better hand grips and we guessed we had to head further left to intersect with the main track. Then yeah, we were on it. The final 10 minutes of climbing up to the hut, after expending all that nervous energy, was taken slowly.

We arrived at 2pm, so had taken four and half hours. The DoC time had indicated 5-6 hrs. Well done, ladies.

After a hot brew, we collected firewood – although there was not much about and it was wet. We stacked it in the firewood box, on one side, away from the little that had been left by previous occupants. 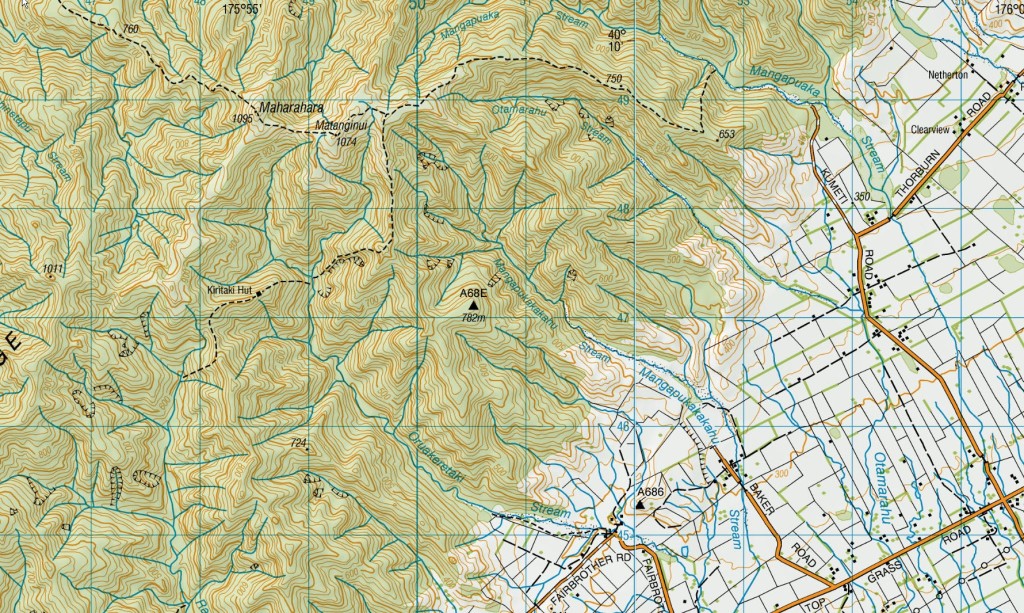 A Topo Map of the area

The rain started in the early evening and did not stop until around 5am. Knowing that the streams would be even worse than yesterday, we decided to take the emergency track out. The main track heads up behind the hut, but leaves it at GPS Grid Ref. 483/466. This is just before the track starts to descend to the Raparapawa Stream. It is not an official DoC track, therefore not maintained or used, except by the hunters or trampers who are aware of it.

We were glad we knew of it (we have used it before) and it saved us. There was a lot of tree fall on the route, but it is still easy to follow along the ridge line. From the high point 485/457, it turns east and descends, and then a small climb to high point 724, where it turns again and heads south-east down the ridge until you reach the farm fenceline at 504/447. We were lucky enough to find the farm owner grubbing out thistles in a paddock. He kindly offered us a lift back to our vehicle at Kumeti road-end. 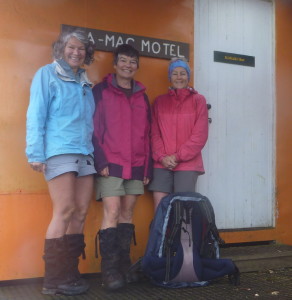 The weather had been cool, but the rain we had expected did not happen; in fact, we had sunshine on our walk out. Good tramping weather and a challenging overnight tramp. Juliet asked at one point: “Is it always like this?” She was referring to the challenging slip climb, and we assured her it was not normal but just a lot more interesting.

One last mishap occurred on our walk out. My Leki walking pole died after five years’ faithful service. It snapped when it was caught in a fallen tree. The search is on for another Leki and I am favouring the Leki Carbonlite XL.

A coffee at the Norsewood café signalled our return to civilisation.