An enthusiastic group of Anniversary trampers had gathered at Park Island and the van left Napier on time, heading for the Makahu Saddle car park. The weather forecast was only average for the mountain ranges, but the adrenalin was running high and recent weather suggested that strong winds might be our problem again. 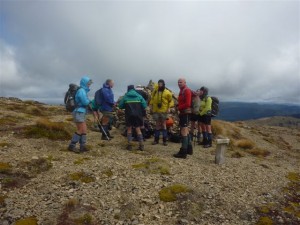 At about 8.30am, 14 trampers left the car park; three headed up Trials Spur and 11 via Dons Spur, reckoning they would get some shelter from the predicted winds on the way up.
With the Kaweka tops as our goal, it was the usual slow but steady progress. The wind was giving us a battering at times and, as usual, got worse towards the top. The ‘Golden Oldies’ on Trials Spur did very well and reached the cairn ahead of the main group, by about 11:00am. We didn’t waste too much time at the top. A couple of photos, and we were on our way again! 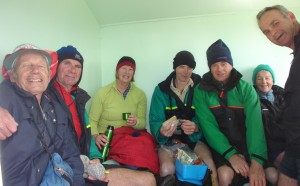 There was some talk of going along to North Kaweka, but there weren’t too many takers and we were soon on our way down Trials Spur. Some stayed at Dominie Bivvy for an early lunch, but all the party gathered at Makahu Hut, by about 12.30 for a chat, and finished a lunch interrupted by showers.

We stopped to check the kauri trees on the way out; finally got dry, and were on our way home quite early, arriving back at Park Island by about 2.30 pm after a hard, but really enjoyable day out. Achieving the goal of Kaweka J on our anniversary trip was a real bonus.