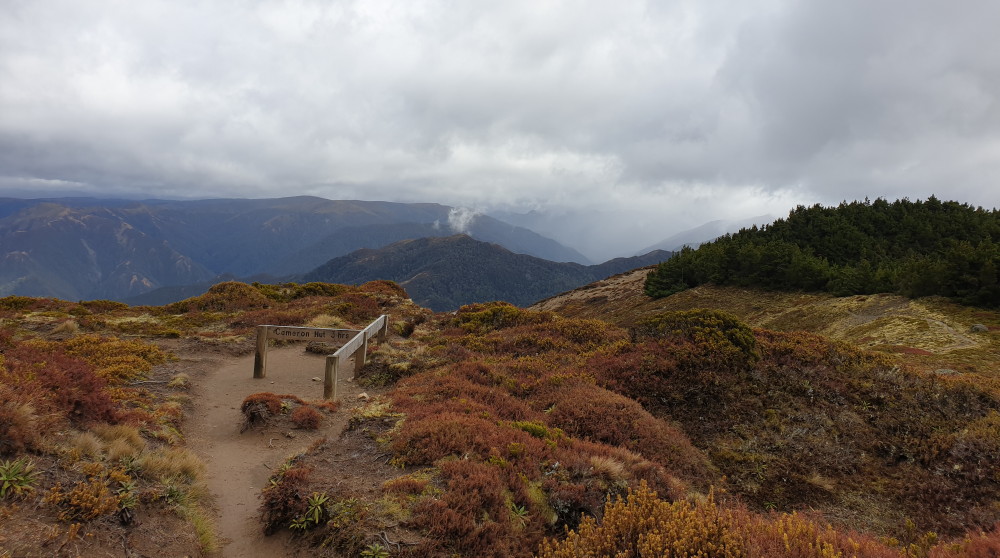 The weekend tramp to Burn Hut, Tararua FP, was cancelled, but the weather further north was looking OK. Checking on Windy.com, the forecast was 15kt winds and a fine day. But the weather forecasters got the wind speeds wrong.

Fourteen trampers were headed up to the Lakes car park, nine wanting to do the loop and five going to Kiwi Saddle Hut and return. 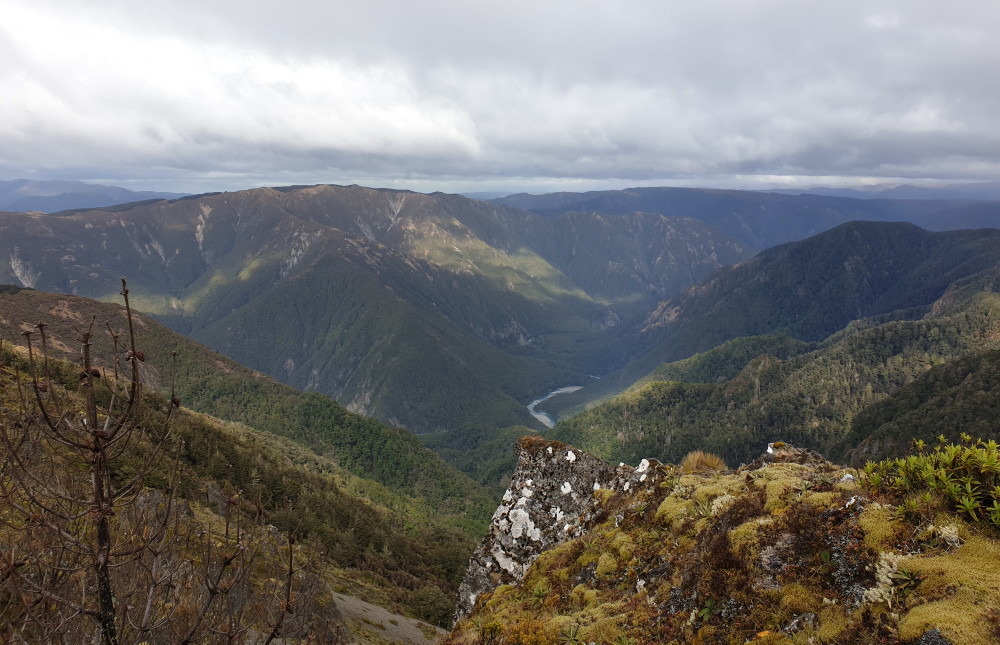 Views down to the Ngaururoro River and across to Te Iringa

One option was to drop off Kaiarahi, down Mackintosh Spur instead of the scheduled walk along the ridgeline and down Rogue Ridge. This would get us off the tops earlier, and safer. Time-wise, there was not much in it.

A decision was made, and a note left for the five who would arrive later at the hut, requesting they pick us up from the Mackintosh car park. 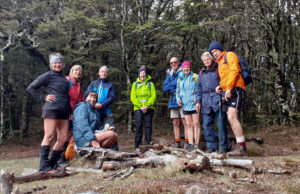 The walk to Castle Camp is along exposed ridges, sometimes in the lee out of the wind which allowed us to gather our breath and energy. The wind certainly saps the warmth and makes walking more tiring.

The bonus was that the tops in the east were becoming clearer, so we had great views west of Back Ridge, and east to The Tits. 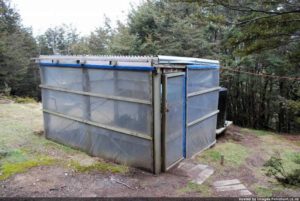 The shelter at Castle Camp, with two water tanks

Our lunchbreak at Castle Camp in the shelter of the wind was welcome, but we still had the last climb up to Kaiarahi in the wind. It is only 30 minutes, so we just went for it.

On reaching Kaiarahi, we stopped to look at Mad Dog Hill, the route up to Kaweka J, and down below Studholme Saddle Bivouac and the headwaters of Kiwi Creek. 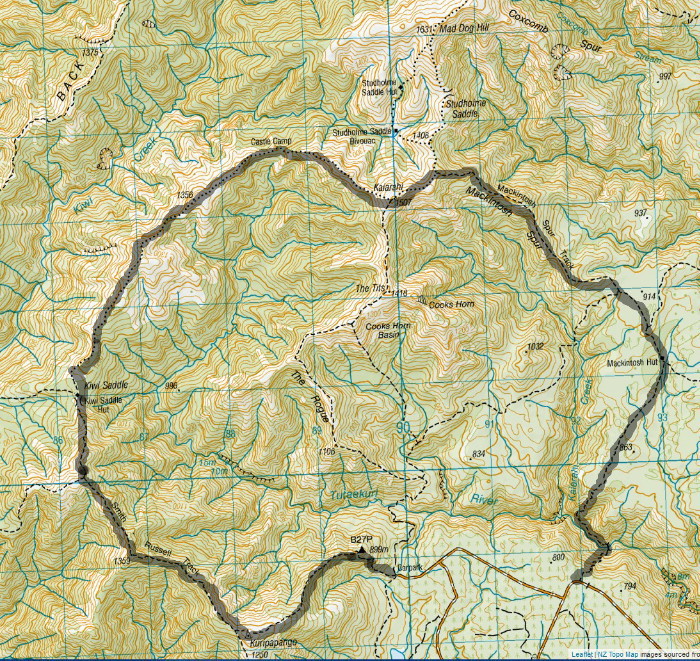 Over to the turn-off to Mackintosh Spur, and then bliss: out of the wind and downhill to Mackintosh Hut. The pine windfalls are cleared, and the track well marked.

We took a final break at Mackintosh Hut before the last 1hr and 20mins; the last climb back up to the car park is a hard slog, especially when you have no energy left.

We arrived to find the van had been moved, so we could savour the hard walk we had just completed. Well done, team. 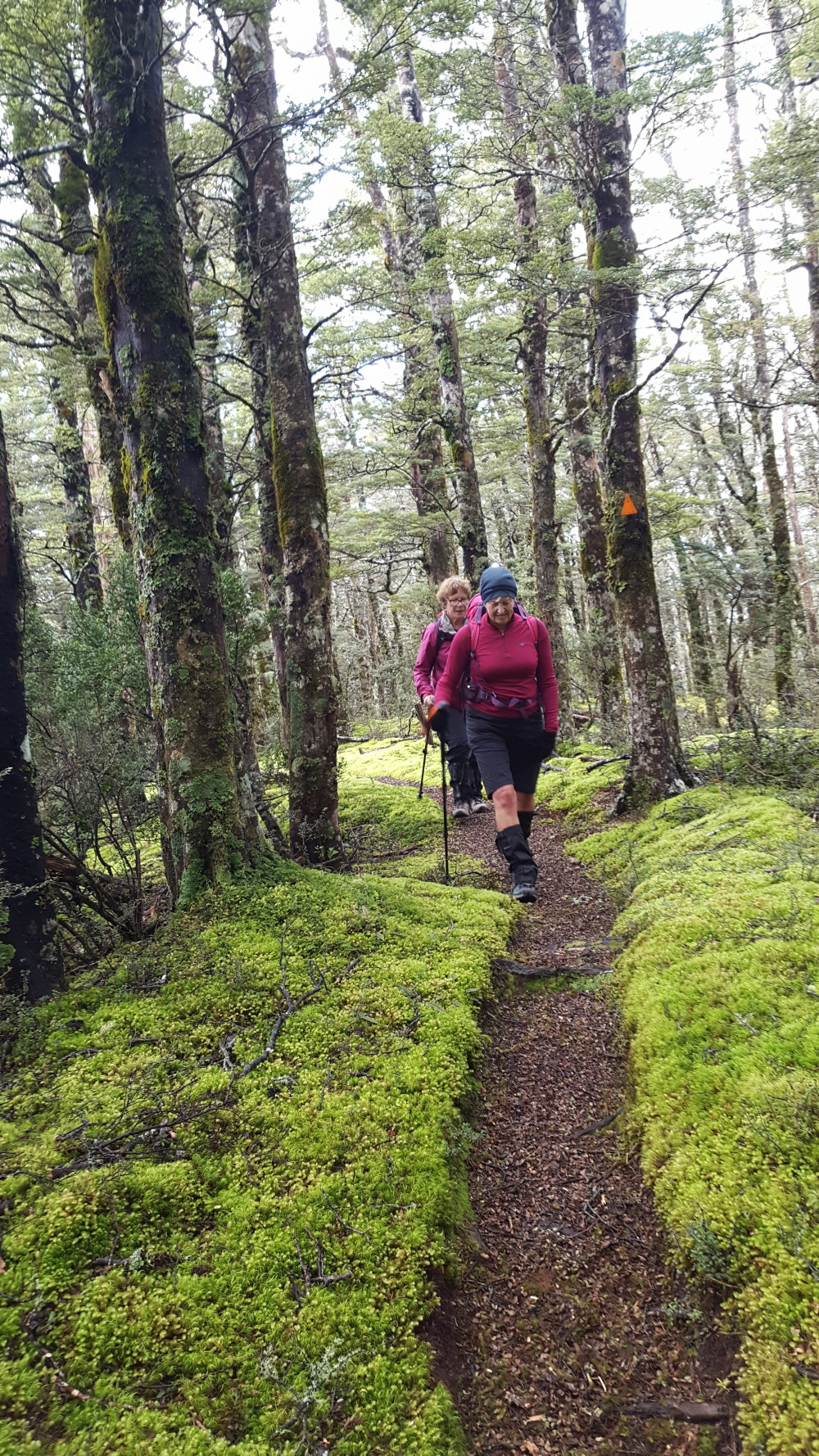 The bush section of the Smith Russell track

Four of us didn’t want to battle the winds on the tops, so we decided on a leisurely walk to Kiwi Saddle Hut. As we walked up the Kuripapango track, the drizzle had ceased and we were sheltered by the hardy kanuka bushes. So we shed our layers pretty quickly. In fact, it was pleasant tramping conditions.

That was until we reached the saddle. The wind was deafening and the trees were well bent over. We chose a sheltered spot down below to have morning tea. Then back on with the merinos, coats, hats and gloves to brave the elements. Thank goodness the wind was blowing from the nor’west, pushing us away from the cliff edge. It was heads down and don’t let the gusts deter us. 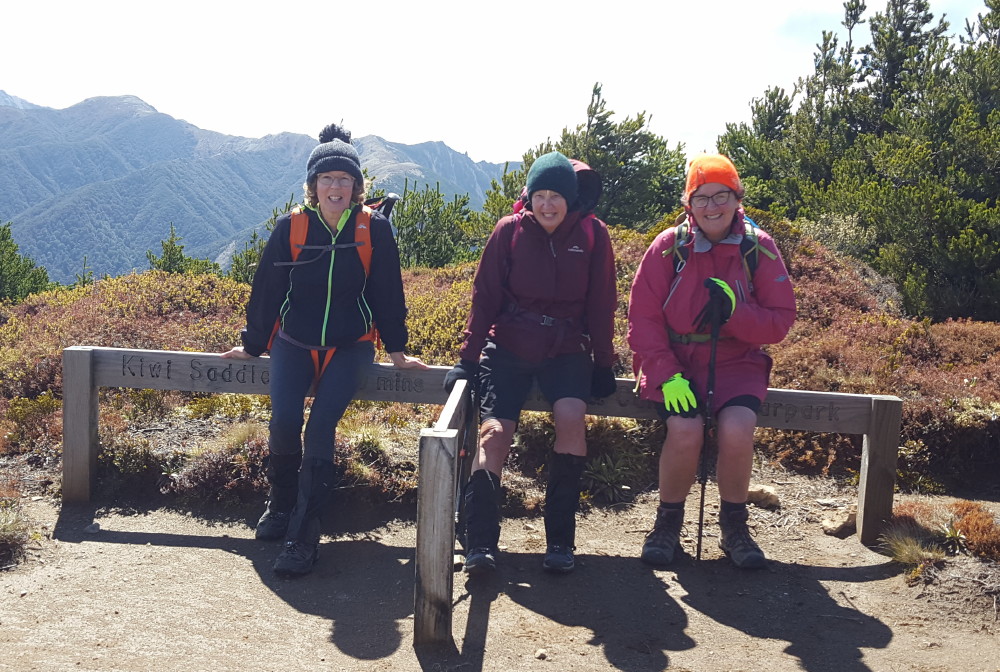 Time for a break

Once we arrived at the Cameron Hut turn-off, we thought of the other group and looked up to the tops but couldn’t see any of them. The strong winds continued and made us walk unsteadily, like drunks, at times. Then a lightly clad runner showed us how it’s done by sprinting past, stopping briefly to tell us he was training for the Tararua 50km trail event.

Over the rocky section, with its absence of trees or bush, the sudden gusts kept coming. Sometimes we had to just stand strong and still because we didn’t want to be carried out of sight.
At the hut, we found Keith. Earlier, he had stopped to put on his knee brace, but he couldn’t catch back up with the main group. He made a wise decision to wait for us. We sat and enjoyed our early lunch and shared lots of stories. 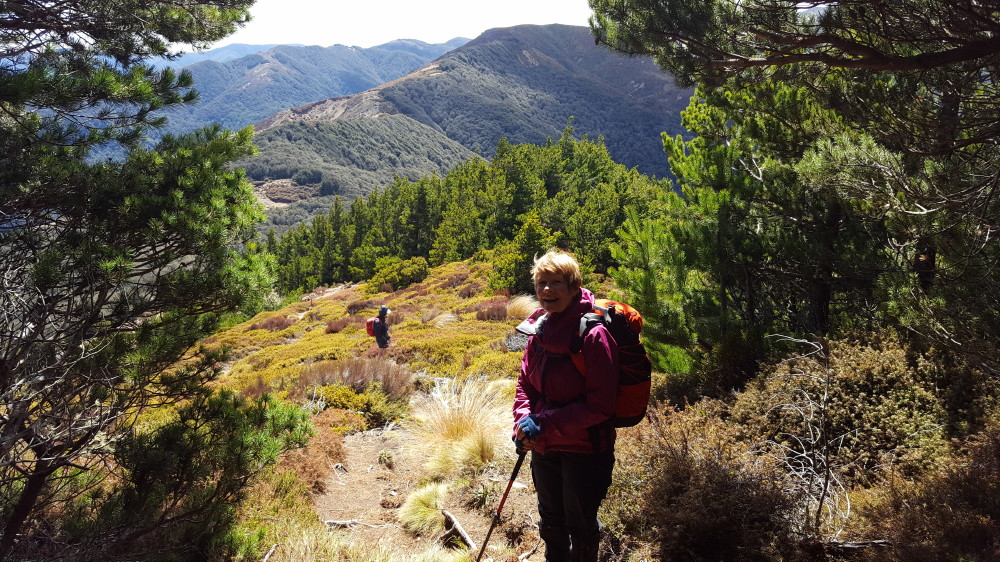 Dropping down to Kiwi Saddle Hut

Then it was the long climb out of the hut to retrace our steps to the car park. The winds and noise hadn’t abated, so it was a relief to get back to the Kuripapango track for shelter and silence.

We shifted the van to the Mackintosh car park and relaxed in the sun, waiting for the other weary trampers to arrive, along with their ‘windy’ stories.

Aranga Hut On Saturday 14 January the tramp was changed to a loop in the Northern Ruahine Range. … END_OF_DOCUMENT_TOKEN_TO_BE_REPLACED

Aranga Hut On Saturday 14 January the tramp was changed to a loop in the Northern Ruahine Range. … END_OF_DOCUMENT_TOKEN_TO_BE_REPLACED