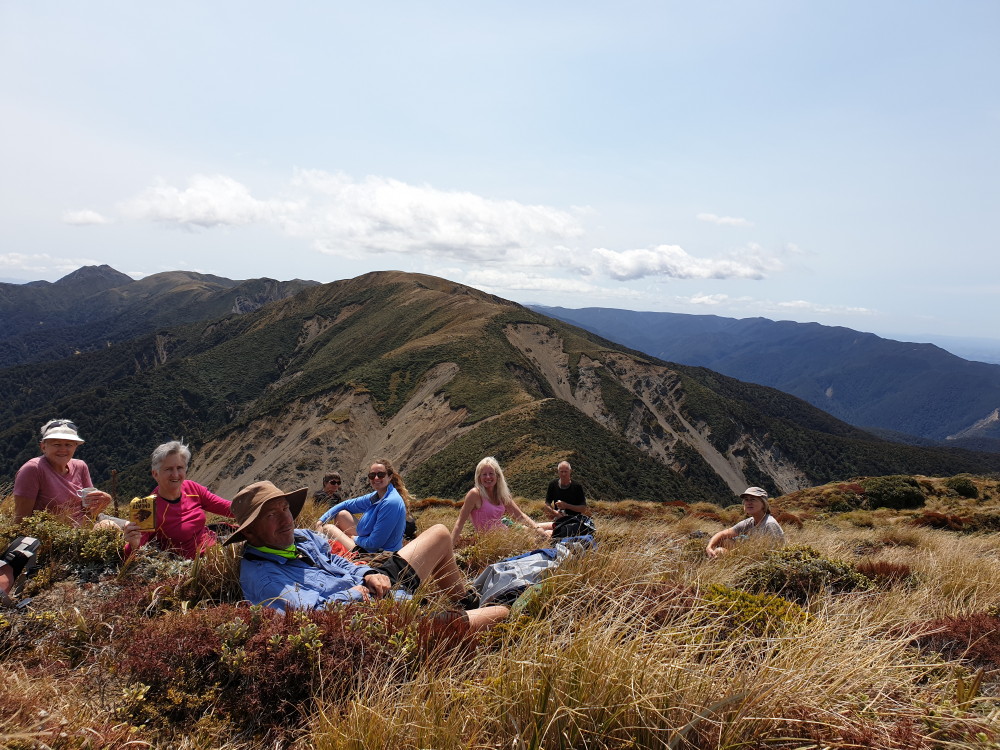 On a gorgeous day, nine wanted to tramp the circuit, which left Geoff to take the van around to the finish point on the farm. (Thank you to the farmer for kind permission.)

The walk up to Sunrise is on such a wide benched track that, to ease the boredom, some music was required – in my case, Thomas Tallis followed by the Travelling Wilburys. The music blocked out the sound of a helicopter which was actioning the Northern Ruahine area predator control which shows on the DoC website alert for the area. (See footnote) 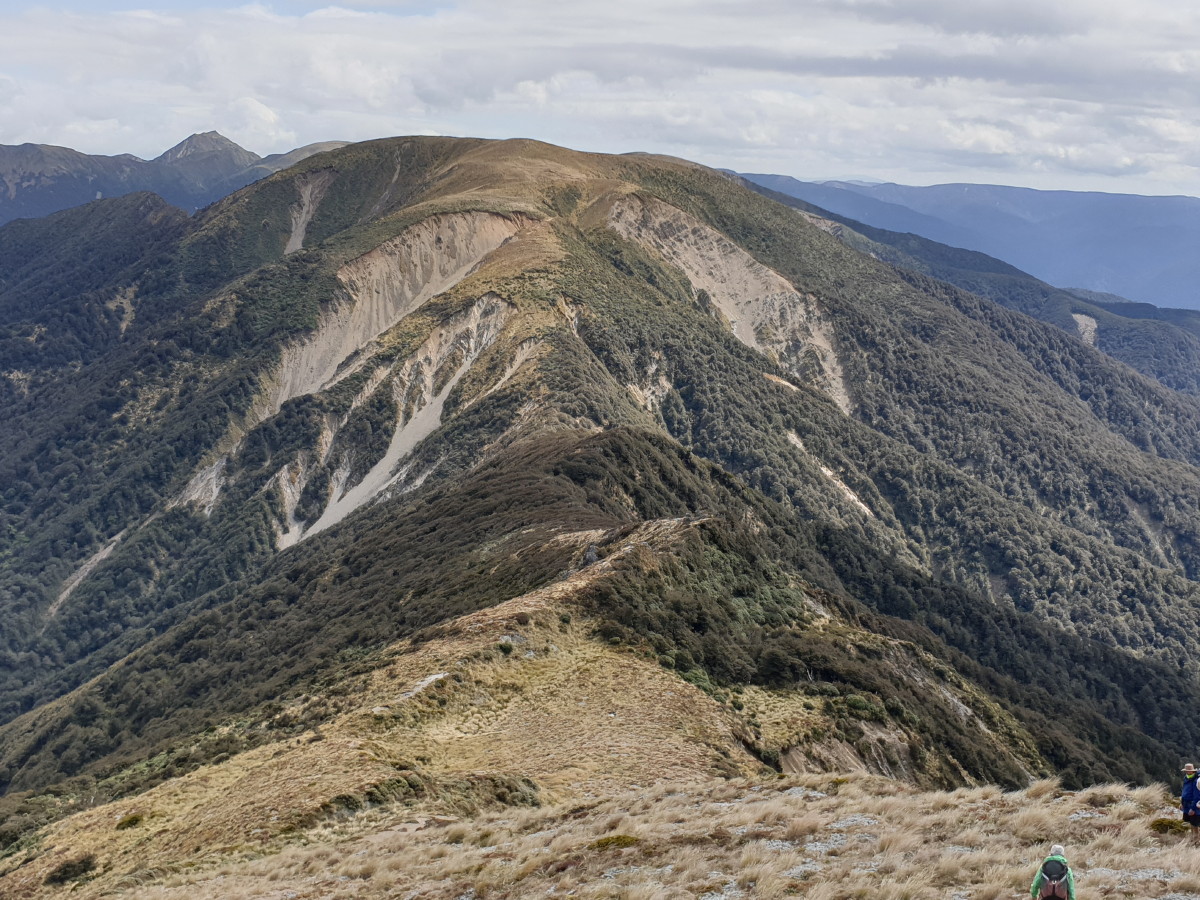 After a quick break at Sunrise Hut, we headed over to Armstrong Saddle 1369, and then the start of the route to 1499. The flattish ledge below, which had a few tarns, and Sunrise Hut could be seen. From the cairn, we ensured that we did not go down the north-western ridge, but headed across to the north-eastern ridge (grid bearing 26 degrees).

We could see 1476 in the distance, but first had to navigate our way through the bush on parts of the ridge. We came prepared to do some track marking but, lo and behold, several trampers had beaten us to it. Their colours-of-the-rainbow tape made this section a lot easier. We wondered if they would run out of tape later along the route. 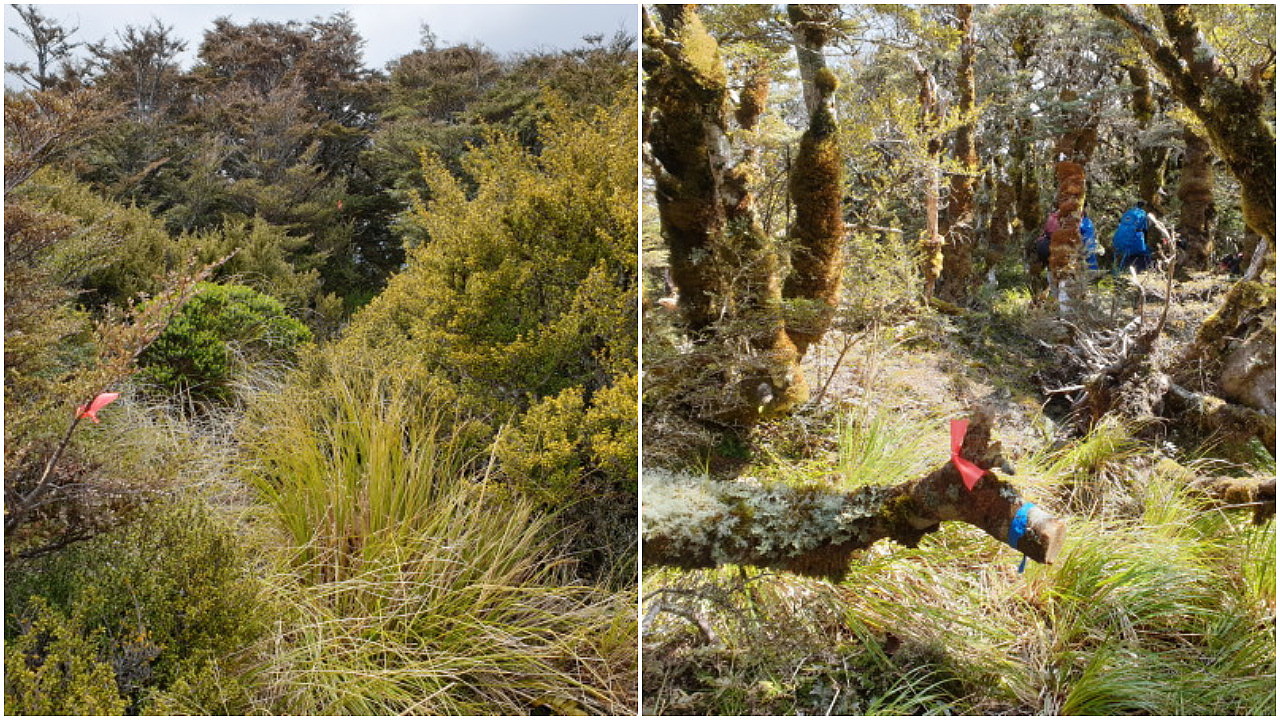 The rainbow route through the bush

And they did. So we shared out some orange tape and managed to mark the last section of the route.

We stopped to look out at the western views of Mts Ruapehu and Ngauruhoe, and across to the Mokai Patea Range.

From 1476, we could then see the next undulations and Maropea 1481. We decided that lunch would be a good idea before we tackled this, knowing that after 1481 we would be dropping down to Sparrowhawk Bivouac, where we could renew water supplies. Marie, who had recently won a lot of chocolate bars in the club photo competition, shared her prize. 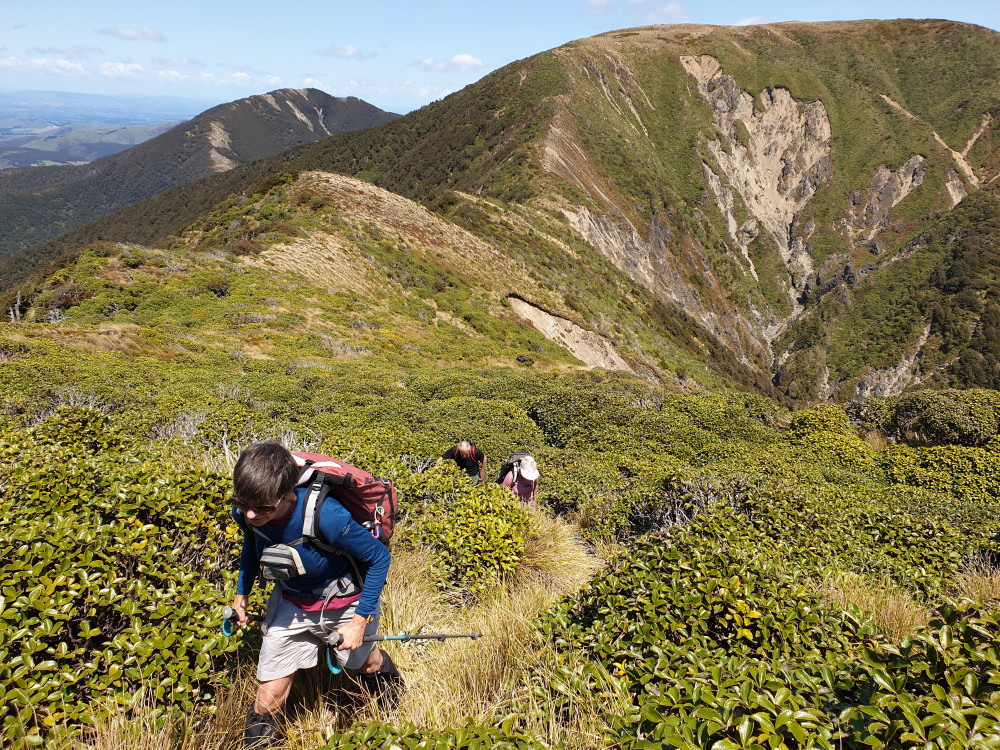 So we soaked up the views and the sun without wind on the Ruahine tops. Te Atua Mahuru and Colenso Spur, Maroparea and the route to Maropea Forks Hut were all clearly visible – a time to treasure. We headed through the leatherwood, which in one or two areas could do with a trim (next time, maybe). 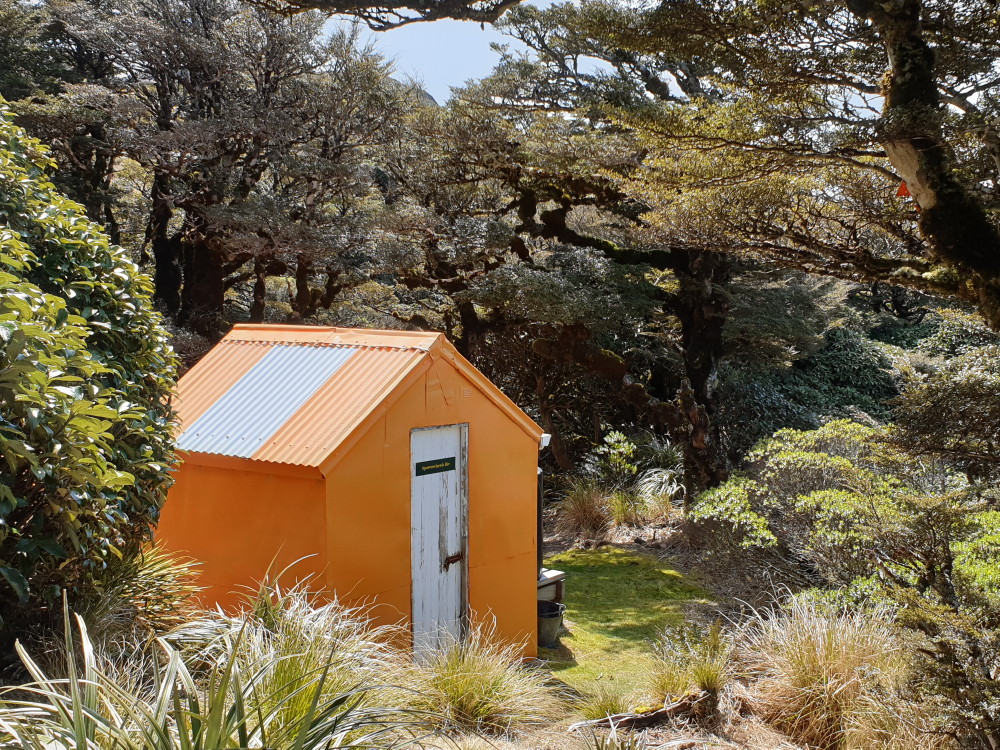 Sparrowhawk Biv, due to get some care and attention in Feb 2020

At Sparrowhawk Biv, after a water refill, we went down to Gold Creek passing the memorial to Danny Rion Jordan, a hunter who was fatally shot by a hunter in a separate party whilst taking a break on the track. His dog, Isla, was also injured. The message is clear on the memorial plaque.

Young kanuka hid the sign up to the Gold Creek Track, but we knew the way to the last small climb up, through the farm, and back to our vehicle. 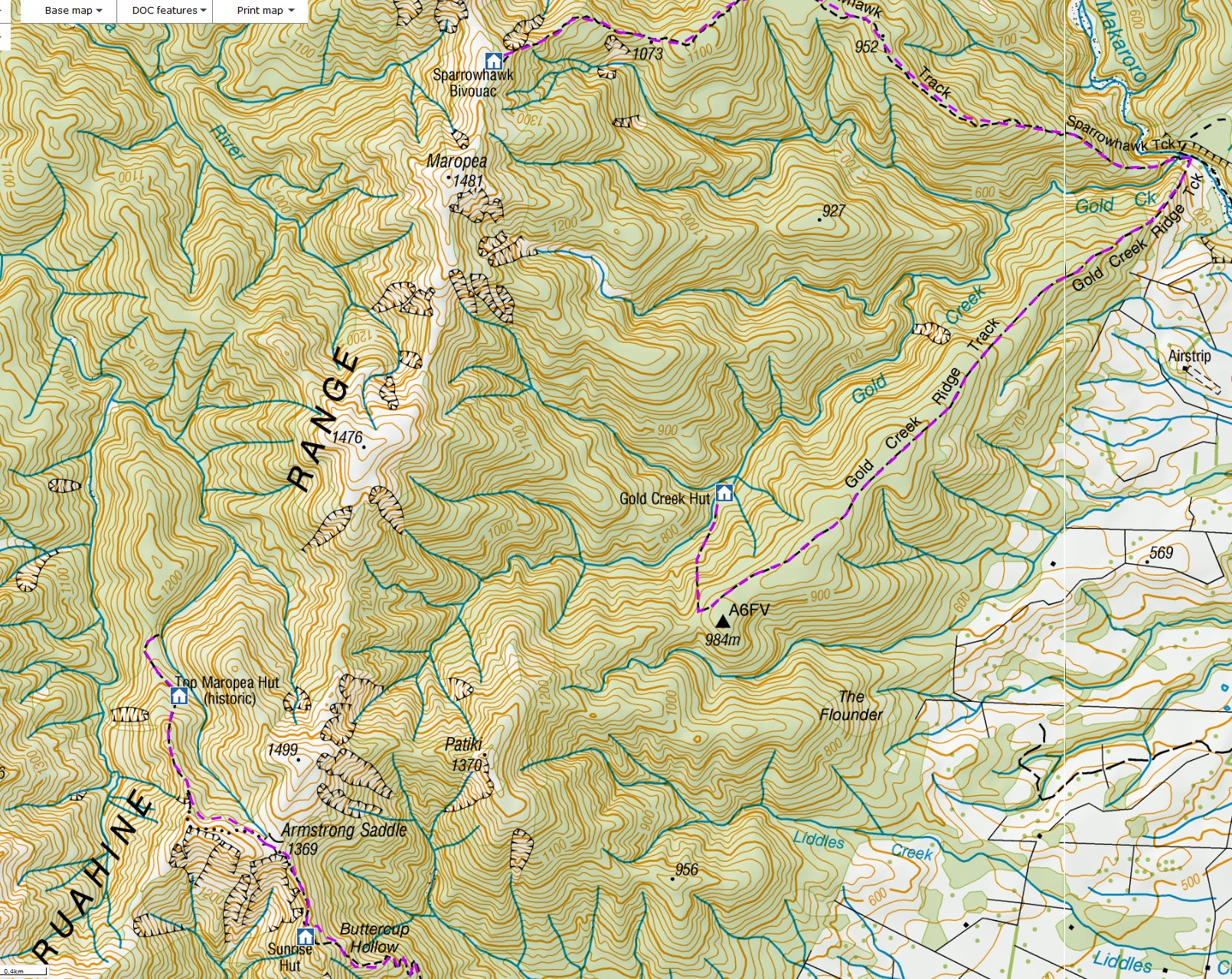 It was an 8½-hour day, but we all enjoyed the chance to be on the Ruahine tops.

Our thanks to Geoff for being the driver and also tramp organiser. Geoff moved the van, was still able to get to Sparrowhawk Biv and have a snooze on the back seat whilst waiting for us.

FootNotes: DoC Alert
5 November 2019: Northern Ruahine area predator control – rainwater
A predator control operation will take place to apply biodegradable aerial 1080. Access to tracks within the treatment area may be restricted until bait is cleared from them, this is generally completed on the day of application. The rainwater collection tank will be disconnected at the hut until bait is cleared.
Predator control could occur any day after 1 September 2019 depending on weather conditions.
As part of the predator control operation non-toxic prefeed will be aerially applied a minimum of five days before applying 1080 bait. Tracks will not close during this time, but visitors should be aware of falling bait if below a helicopter.
The operation is part of Tiakina Ngā Manu, DoC’s successful predator control programme that protects vulnerable wildlife.
First published on 2 September 2019. Last reviewed on 5 November 2019.

A year in the life of a GuideOn June 3, Graham Leech gave a presentation at the club meeting … END_OF_DOCUMENT_TOKEN_TO_BE_REPLACED

A year in the life of a GuideOn June 3, Graham Leech gave a presentation at the club meeting … END_OF_DOCUMENT_TOKEN_TO_BE_REPLACED