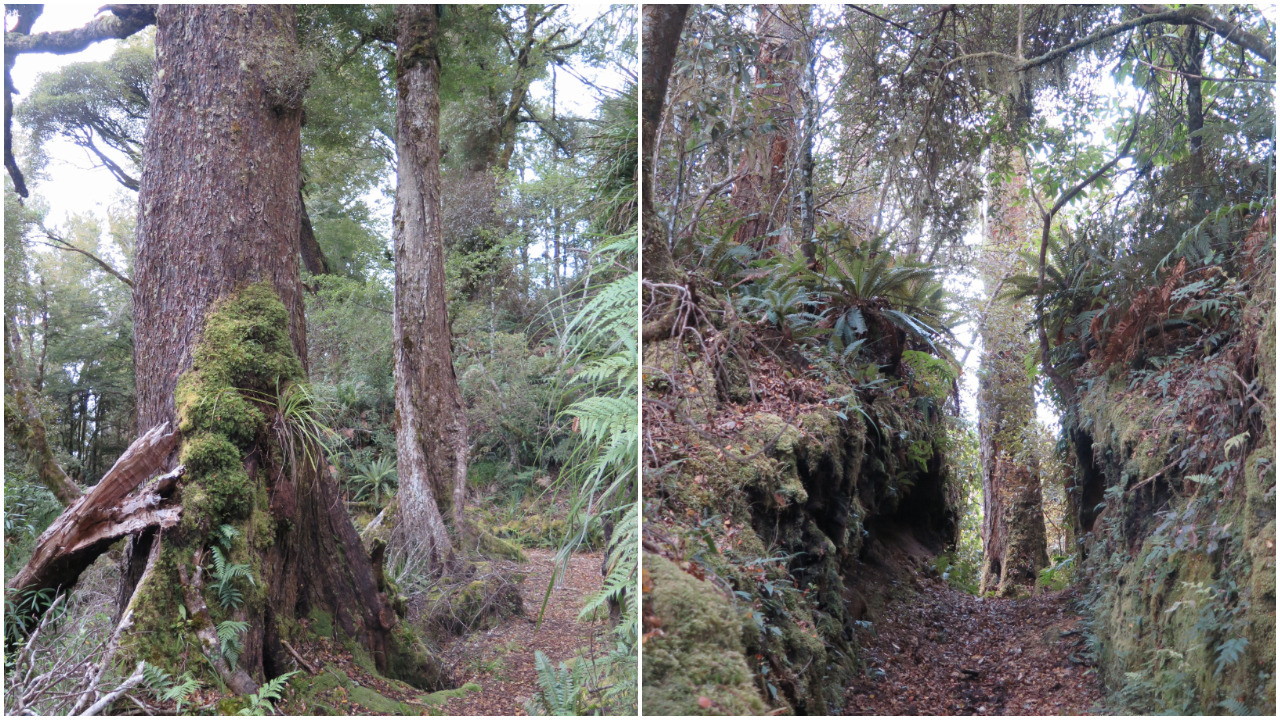 Going into a new forest is always an exciting prospect, especially one you have heard people rave about – and Whirinaki for me did not disappoint.

It was overcast and cold by the time we arrived at the turn-off on the Napier/Taupo road just under an hour out of Napier. We were expecting the logging roads to the plateau car park to be pretty bad from past experience but, apart from some potholes at the start, the road was pretty good and there was plenty of signage. So no chance of getting lost with Bruce at the wheel and Alison navigating. 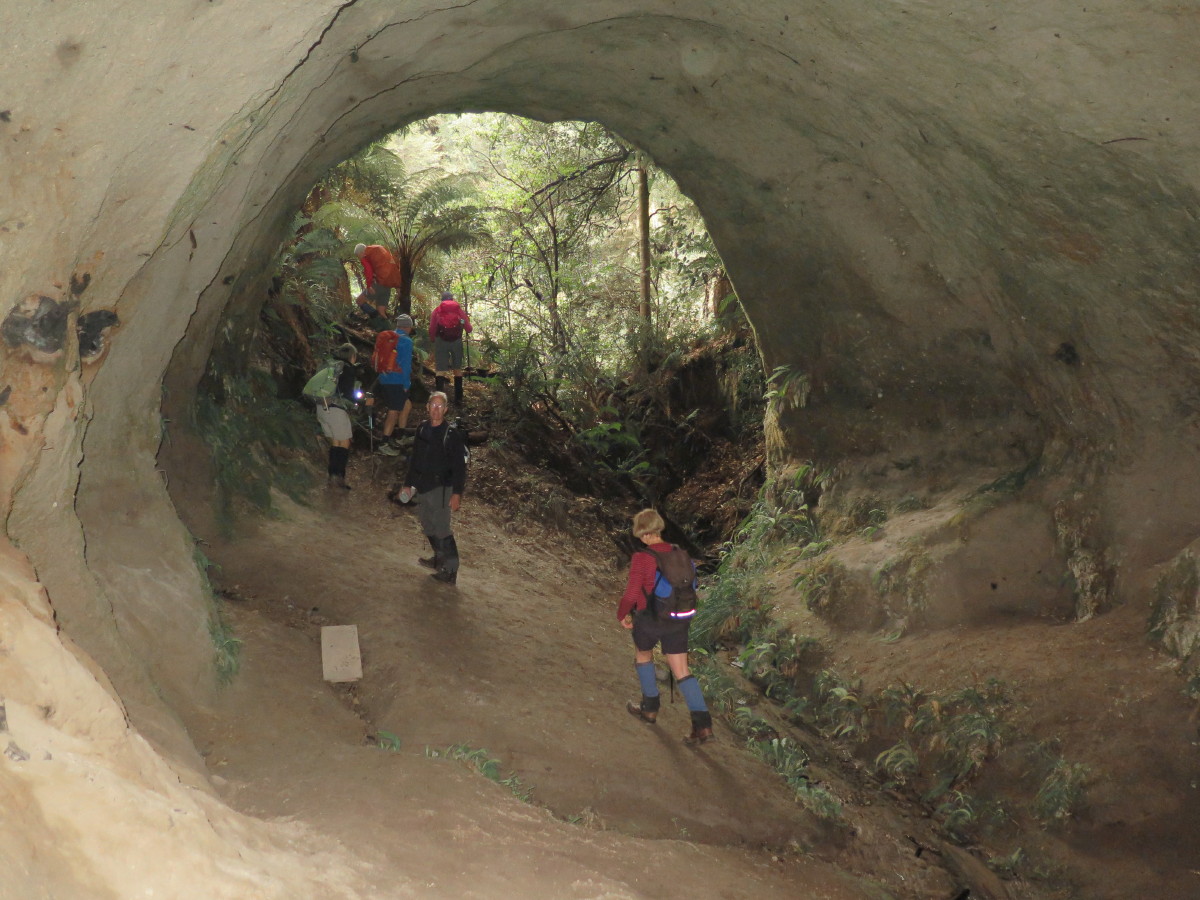 We were out of the van and on the track by 9 o’clock. Not far in, you start a descent to the river. The bush here is mainly made up of very large rimu and several varieties of beech. Mountain cabbage trees are prevalent and it was lovely to see them in flower – plus lots of clematis to enjoy, and an impressive range of ferns.

Morning tea was had directly after crossing the one and only swing-bridge, not far from a cave which, after our quick stop, we popped into for a quick look-see. 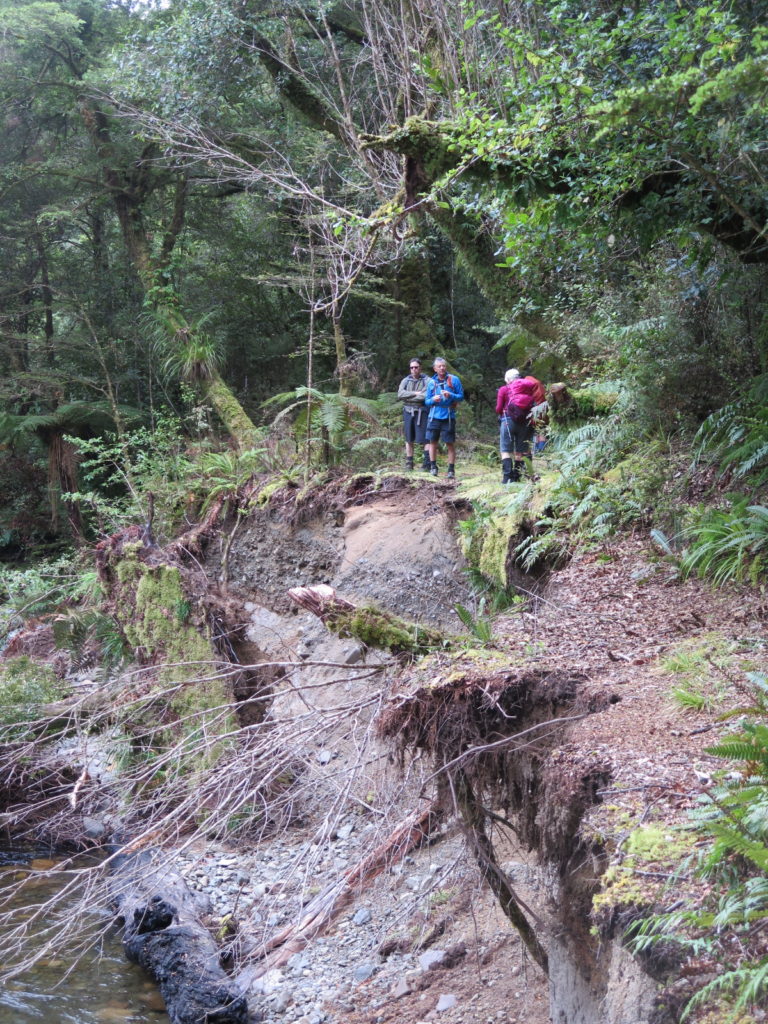 The riverbank is very close to the track

Although there were fallen trees here and there on the track, they had been cut through, so generally it was pretty easy walking.

Lunch at the hut was quick, but only because it was cold even with all our layers on. In fact, the temperatures were that low, we never got to take any layers off during the entire tramp. Before leaving the hut, it was down to the river’s edge, hoping to spot some whio, like the grouping that John Russell photographed and now grace our website. But alas, no whio to be seen or heard today…

It started to rain once back on the track but mercifully with no wind, and we made a few brief stops for photos and to take in the kaka which we had been listening to on the way in and now coming back out. Even though we had a climb back out of the river valley, it was a much quicker tramp out.

We’re grateful to those who have helped save this beautiful piece of bush for us to enjoy.

Described by acclaimed British botanist David Bellamy as one of the great forests of the world, the podocarp ancestors of Whirinaki’s trees evolved more than 200 million years ago while New Zealand was part of the supercontinent Gondwana. Bellamy was so captivated by the primordial character of the Whirinaki he called it the “Dinosaur forest – one of the best Mesozoic plant communities remaining on Earth”. Podocarp (cone-bearing) forests used to be much more extensive in New Zealand, but years of human habitation changed all that. Burning, as a hunting technique by early Māori, and later extensive land clearance for farming and exotic forestry have resulted in few such forests remaining. Today, 95% of these forests on the North Island have disappeared. Whirinaki is one of the last precious remnants and one of the best remaining examples of lowland podocarp forest left in New Zealand. Source: DoC Walks and Tracks Brochure: Whirinaki Te Pua-a-Tāne Conservation Park.