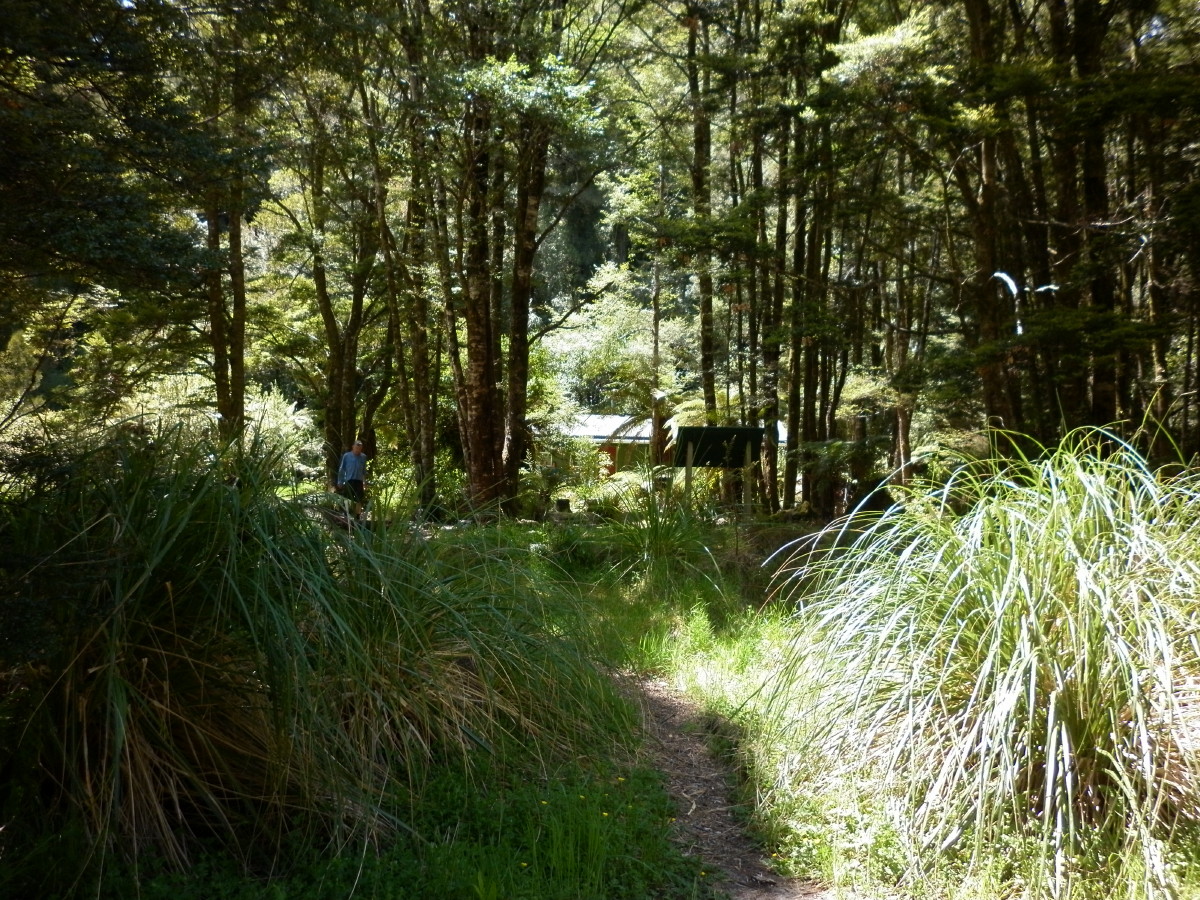 The forecast was for westerly winds and 20˚ with a southerly change and showers late in the day. They got it spot on.

The journey there took just over two hours but the drive is always worth it for the native bush, gigantic trees and sounds of bird life.

We left Church Road at 7.30 with 19 on board two vans, arriving at the turn-off from the Taupo Road at 8.30-ish. The logging roads were, as expected, full of pot holes – some big enough to get lost in – and (would you believe it) they have been cutting down trees which changes the landscape and confuses the drivers. But never fear, Ted and Kelvin got them through to the end of Plateau Road and the car park (as well as the later return to SH5).

The objective for the day was to walk to the Central Whirinaki Hut for lunch and return the same way. Fourteen of the party did this, whilst the other five were left to their own devices in the surrounding area. 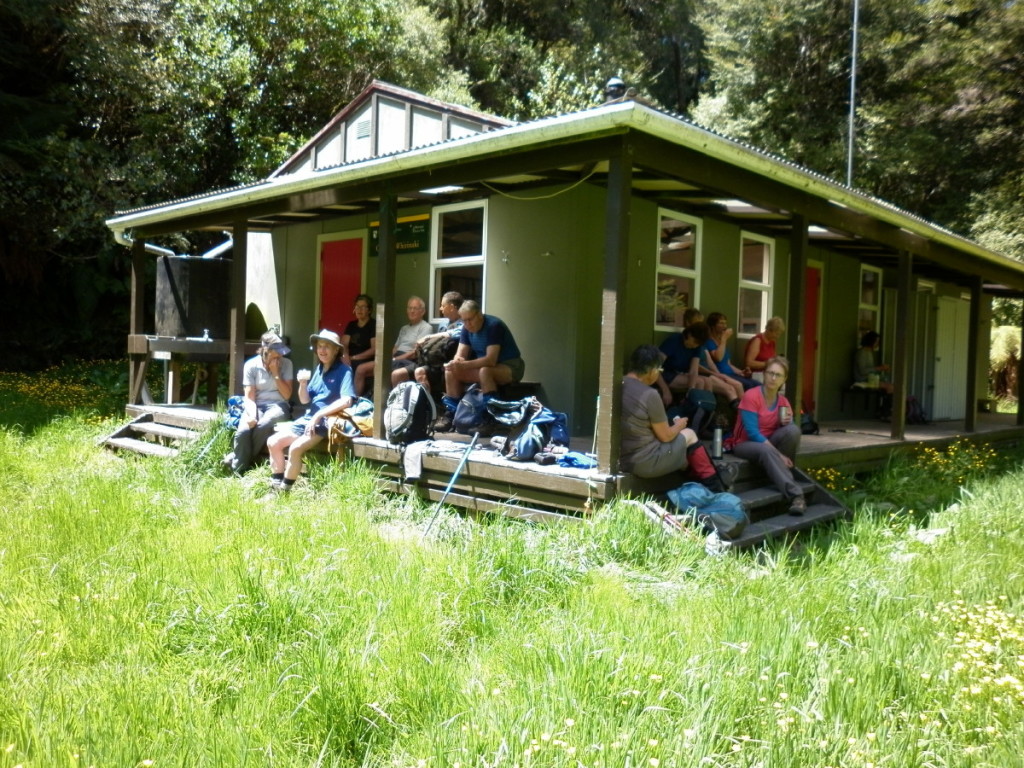 At about the halfway mark, the track crosses the Whirinaki River by way of a wire bridge. Adjacent to the bridge, a short side track leads to a large sandstone cave which was a compulsory detour for those who had not already seen it. From there, we followed the course of the river, trending downhill all the way. About 2km further on, we crossed the Taumutu Stream via a wooden bridge at the point where the stream joins the river. Along the way, there were numerous instances of kaka calling to each other (or was it to us?) but unfortunately we did not see any. We arrived at the hut on time at about 12.30. Lunch in the sun followed by a stroll down by the river was very pleasant; one of the group decided to have a dunk if not quite a swim. A great way to cool off. 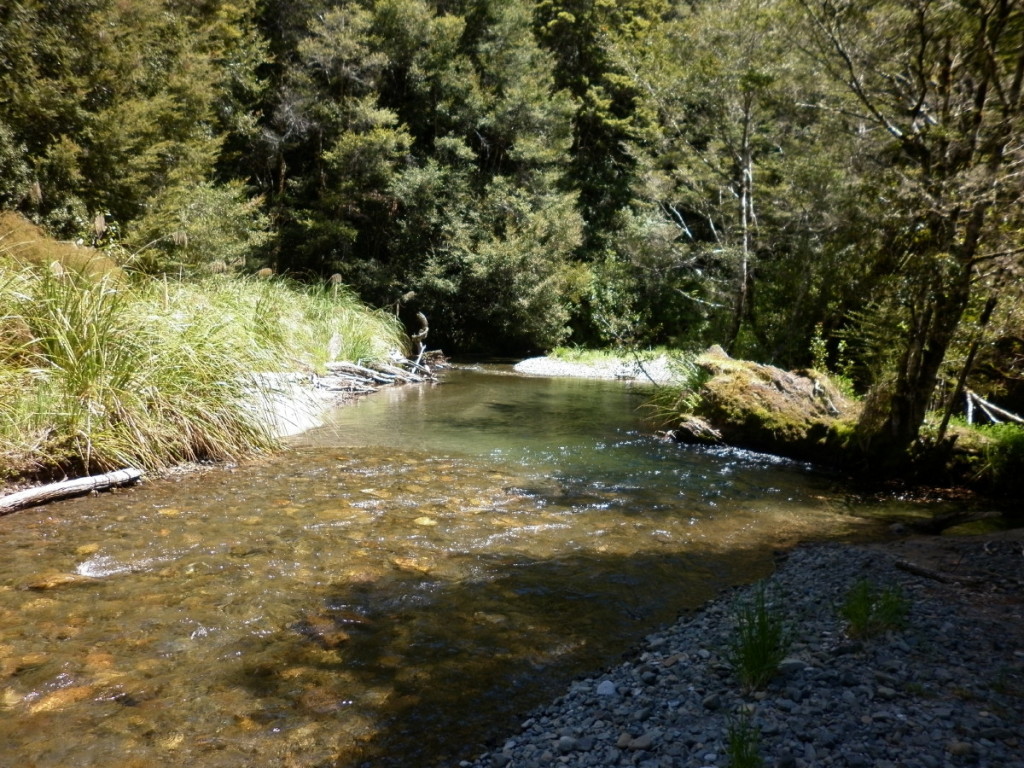 All those downhill slopes that we had enjoyed in the morning amazingly had transformed into mountains to climb in the afternoon going the other way. How does DoC do that? Nevertheless we all made it back okay. The slowest was back by just after 4.00 so it was a good all-round effort. We met up with Gossy at the wire bridge as he was completing one of the circuit tracks that includes the Upper Whirinaki Hut. The others were all at the car park waiting our return, so we were able to get on the road by 4.30. A deer was spotted from the van, near the road, in an area of young pine trees.

A good day was had by all.

Mackintosh Hut/Rogue Ridge, Kaweka FP, Saturday 17 September 2022 Banner Photo: The leaning sign at the top of Mackintosh Spur It was a sunny, … END_OF_DOCUMENT_TOKEN_TO_BE_REPLACED

Shine Falls, Local, Wednesday 7 September 2022 Banner Photo: Group selfie and the falls Nine of us set off on a very frosty morning from Park … END_OF_DOCUMENT_TOKEN_TO_BE_REPLACED

A-Frame to Stanfield Hut, Ruahine FP, Saturday 3 September 2022 Banner Photo: At the A-Frame Hut We had a full vanload booked to do this trip. … END_OF_DOCUMENT_TOKEN_TO_BE_REPLACED