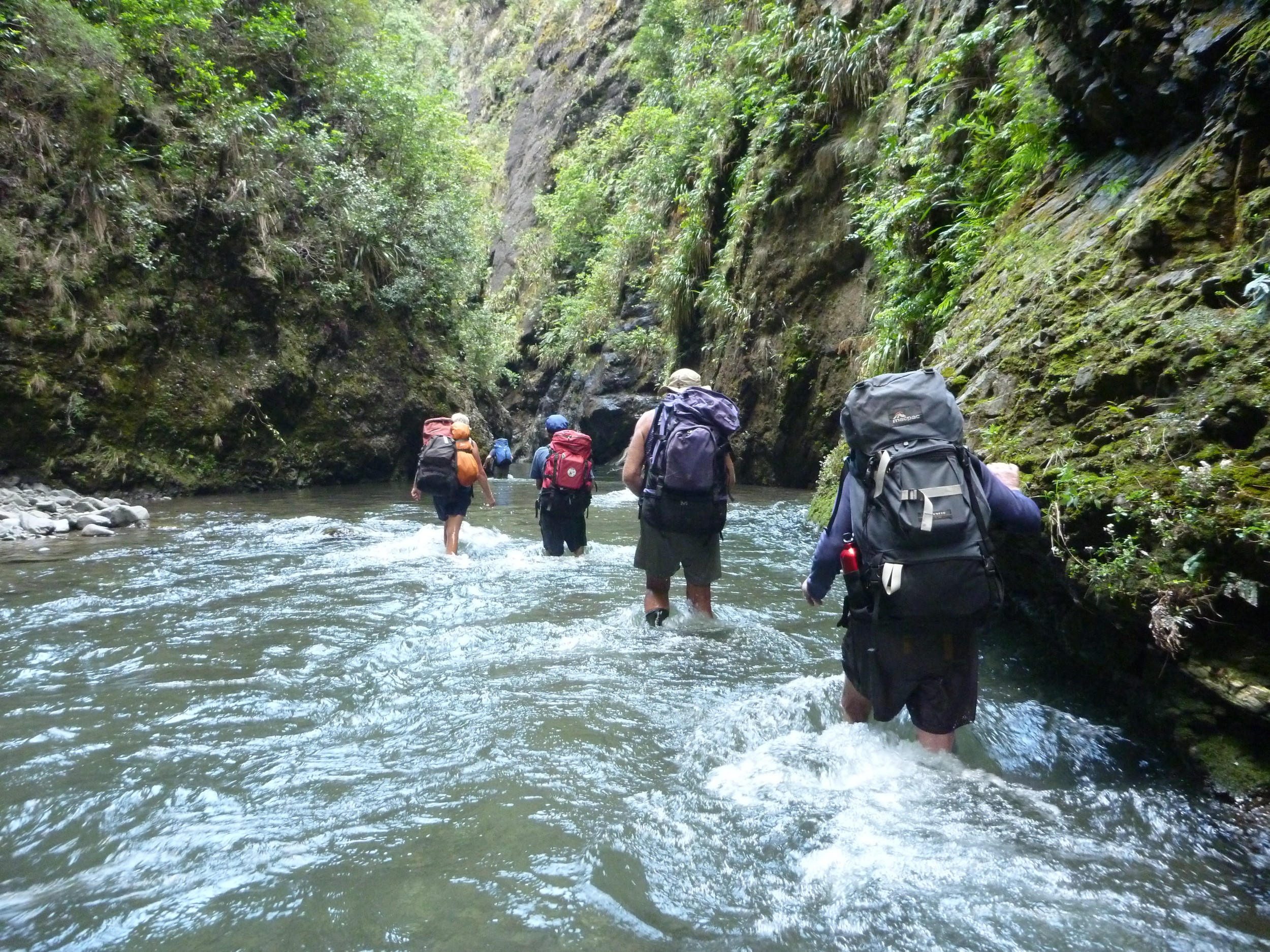 This was the headline on Monday December 16, but I should start at the beginning. It has been about 12 years since the club has done this trip. It began with the drive through Timahanga Station which straddles the Napier-Taihape Road, in the Hawke’s Bay. We had the kind permission of the owner to drive through and leave our two vehicles at the southern end farm track. 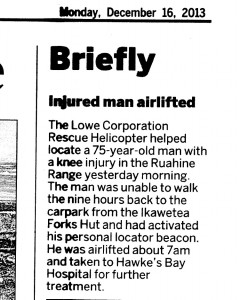 It was a bit of guesswork, but we made it, without seeing Lake Whalehole, and we headed for Ikawatea Stream.

On reaching it, we started what would prove to be a very long river walk. The river was wide and gentle, and we sidled next to it on farmland. My “wouldn’t it be great if the trip was all like this” comment received a derisory laugh from three trampers, in our group of seven, who had done this trip 12 years ago. For the rest of us, Alison, Les, Jenny and myself, it was new territory.

We had been led to believe that the walk would be a piece of cake, and take no longer than five hours and be ankle-deep. Well, what a difference 12 years makes on the mind and body.

We made our way upstream, wondering when the knee-deep river would become a stream. I checked the GPS, and we were in the right place, but it was different to how they all remembered it. 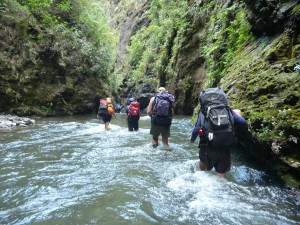 We stopped for lunch on a grassy bank in sunshine. The next few kilometres, the river walk proved to be lengthy. The water got steadily deeper in some parts, with feet barely touching the bottom. The water seemed to get bigger and stronger. At one point, Ted – the biggest and strongest of us – had to assist us all crossing. Walking against the current was energy sapping. I kept on taking GPS readings, but in the end no one wanted to know. It was a case of ‘Are we there yet?’ We heard thunder in the ranges, and were aware of the dangers of the Ikawatea Stream rising fast. But it did not rain heavily.

Then, just after 6 pm, we saw the orange marker indicating the hut. It was on the forks of the Ikawatea stream and Apias Creek. The hut is above the stream, in bush, and was tidy and empty.

We all heaved a sigh of relief and made a hot drink. After drinks and nibbles, we crashed to bed.

The next morning, Ted, who had sustained an injury slipping on a boulder, got up and declared that he would not be able to walk out. Alison and I had discussed this, and at 6.40 we pressed the button on the PLB. The aerial was up, and we placed it outside the hut to give a clear signal. We then all continued with our breakfast and an hour later we were at the helipad.

Paul, who had also sustained a muscle injury, was also in no condition to walk out. We waited – and half an hour later heard the chopper. It did a high over-flight (to check out the area) and then landed on the helipad. The captain shut down the engine and the paramedic came to see Ted to assess the injury. He also suggested that Paul be dropped off back at the vehicles. 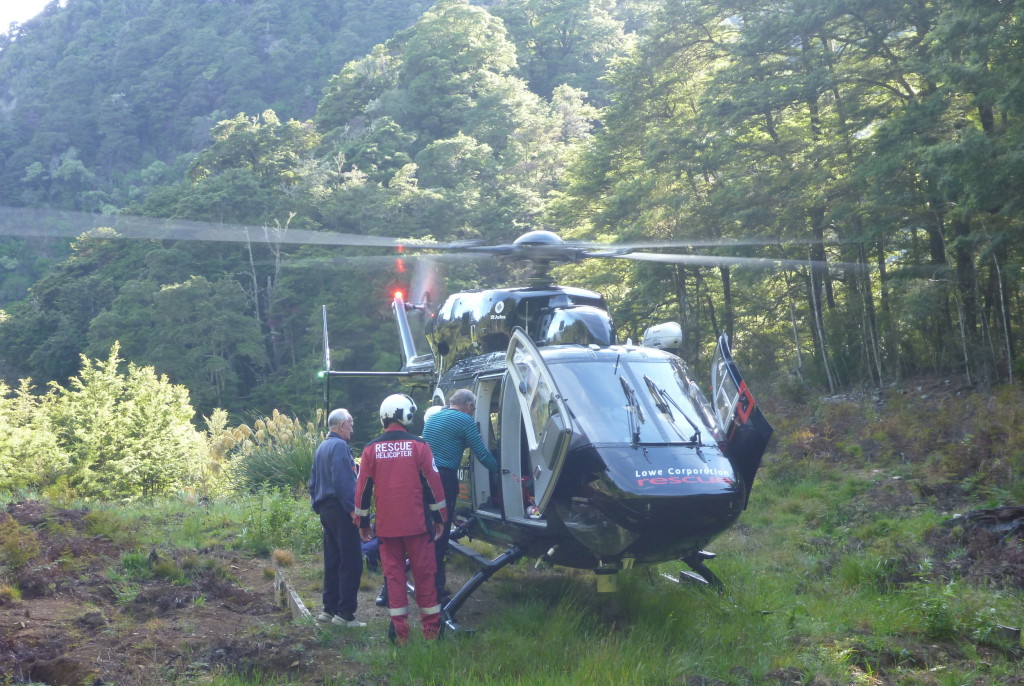 The rescue team consulted (pilot Jeremy and crew) and then it was agreed: Paul to be taken to the vehicles and Ted to hospital.

Meanwhile, the rest of us were all taking photos and not looking forward to another long day in the river. 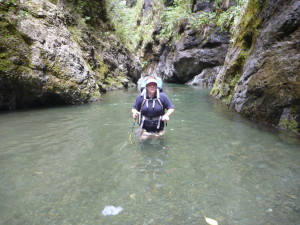 Paul and Ted departed at 8.40 and we immediately set off on our walk out. We were all wondering how we would get past one tricky bit (the one where Ted had assisted us). But this time, because we were not fighting the current, we were able to travel much faster and find more riverbank options – although sometimes they were more trouble than they were worth. We came across a good place to fly-camp, but none of us want to come back this way again.

We saw a pair of whio and marvelled at the rock walls on the river banks. There was nowhere to get out of this river. The deeper gorges were much better to cope with this time, as our packs held us up in the water.

On the tricky bit, Les found and used a long bit of tree trunk and we used this to cross. Phew, we all were relieved. The day was very hot, so we did not mind the fact that we were all getting wet up to the waist at times.

When we finally reached the farmland we were all glad to leave the river after two days in it. 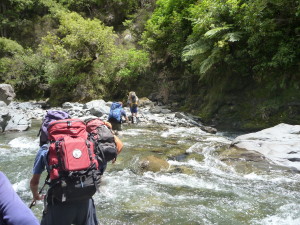 We found Paul back at the vehicles and he told us about flying over the river back to the vehicle in two minutes. We had taken 6.5 hours. The thunderstorm clouds over the Kaweka Ranges were very dark, but we missed the rain.

We proved that the PLB worked and club emergency contact Brian Mackie had been contacted by the Auckland base, which monitors the signals. Brian was able to advise them of the trip destination and this coincided with their analysis. We were at Ikawatea Forks Hut, and he was able to provide the names of the party and their abilities.

Ted was taken to hospital in Hastings, where his injury was attended and he received four stitches and told to rest it for several days. If it had been any deeper, he could have cut into a tendon – so he was lucky.

The rest of us do not want to travel up the Ikawatea Stream again. Next time, we will go via No Man’s Hut and the ridge track. Then out via Apias Creek to Rockslide Hut is the better option.