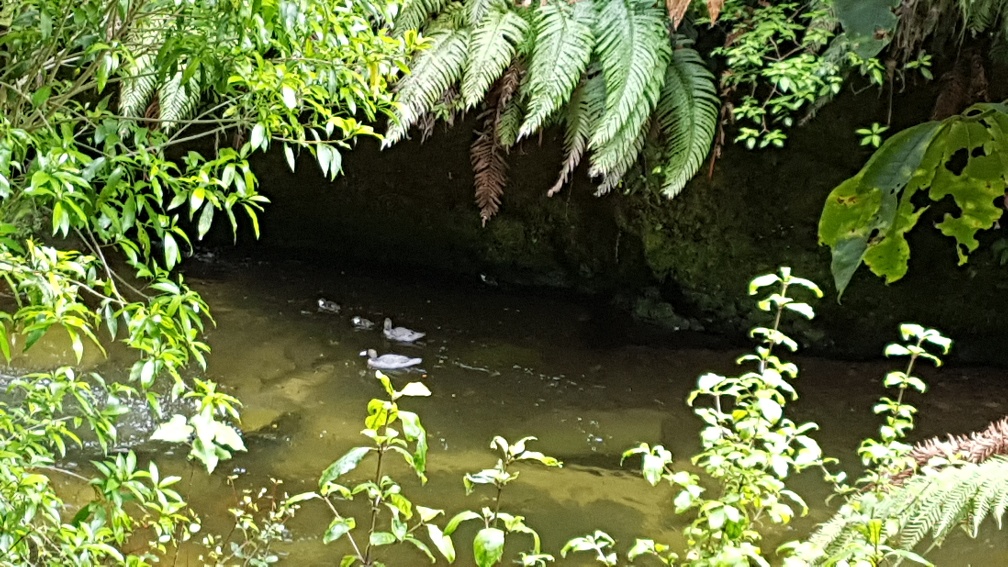 A van and a carload of trampers travelled to the Plateau road-end in the Whirinaki (Te Pua-a-Tane) Forest Park. Once we hit Pohokura Road off the Napier/Taupo Road, we very quickly realised we were off the tar seal. This first section was full of deep trenches and huge potholes. Praise must be given to Alison and Bruce, and Kelvin on the return leg, for their excellent driving and negotiating skills. Thank goodness that no one suffered any injuries from the excessive bumping!

Most trampers walked the full 26km to the River road-end. However, four members took the vehicles round to this point (very much appreciated) then walked to Vern’s Campsite and return via the loop track around the waterfall. 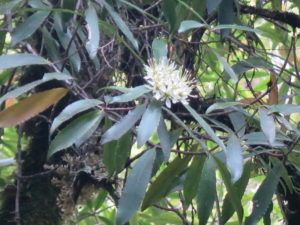 It was great being back in this park, admiring all the giant native trees and the many different ferns and moss growing on either side of the track. Alison wanted us to keep an eye out for a Tawa tree with its white flower. Once we spotted it, we identified several more in flower during the walk. Bird life was very evident, especially the kaka, and the robins and fantails often popped up on either side of the path. The track follows the Whirinaki River, so we kept an eye out for the elusive whio duck. The newbies to this track took a side visit to the cave. 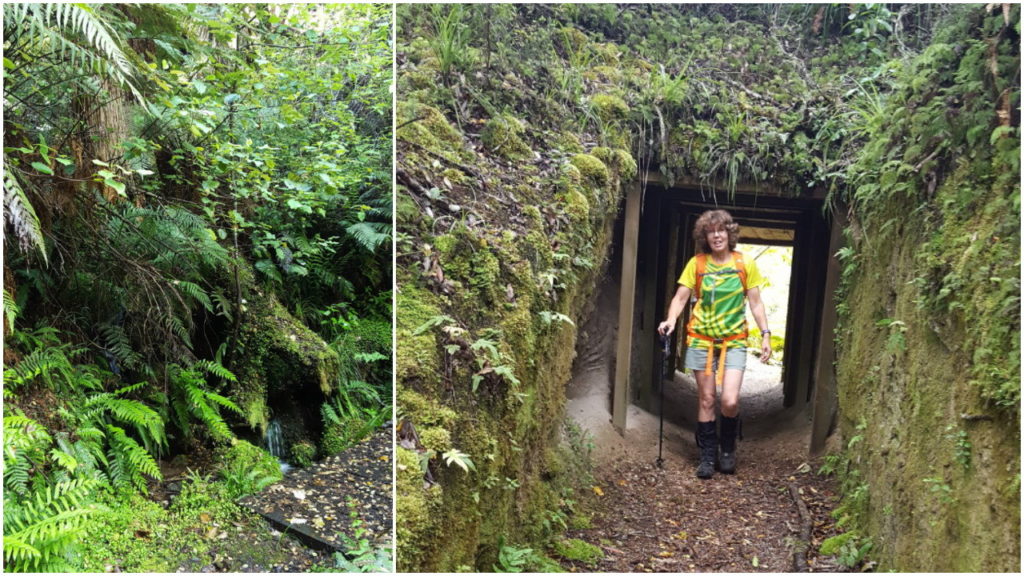 The lush vegetaion (L), and Shona in the tunnel (R).

It pays to be in the front group because 20 minutes before the hut, Phil spotted a family of five whio. Despite being quite high up from the river, we had a superb vantage spot and watched them for almost ten minutes. The ducklings were enjoying playing and frequently ducking under the water and practising swimming against the current. We were interested to see how the young ones would negotiate a rapid and then a large rock. No worries; they proved to already be proficient swimmers.

Thank goodness for Bruce, who had an alum key, and John with a screwdriver, because they were able to release two big rats and a stoat from three traps. After 2½ hours from the start, it was disappointing to arrive at Central Whirinaki Hut to find the surrounding grass nearly chest high. Here we had a bite to eat before continuing the second stage of the walk to Vern’s Campsite.

When it was possible, everybody was looking for whio, but sadly no luck. As we neared the campsite, there was evidence of motorbike tracks. At Verns, five trappers on moto-cross bikes were enjoying a break. They told us there are 26 families of whio on this section of the river. This is a very good sign as the presence of whio usually indicates a healthy river and fewer predators. 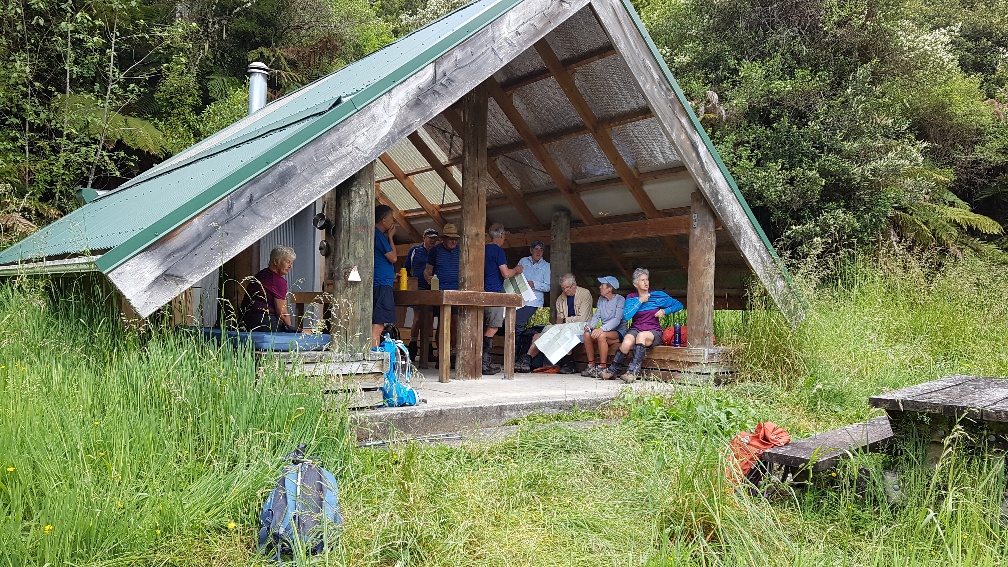 The break at Vern’s campsite shelter

Everybody met up here for a late lunch (2pm). It was pleasant sitting in the well-constructed shelter out of the direct sun. Again, the grass was high. Kelvin had left a note letting us know that his group had been here and gone. 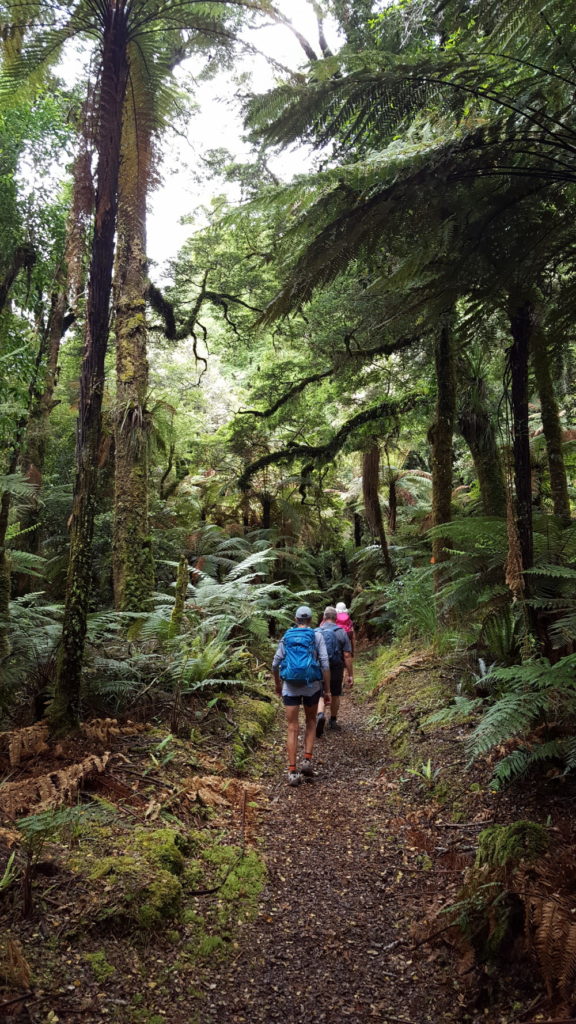 So on with the final stage, with Alison’s prediction we would arrive at the car park about 4.30pm. Some diverted to view the waterfall but it was difficult to get a good sighting because of the overgrown bush. Then we stopped on the bridge to view the Te Whaiti-Nui-a-Toi Canyon. Sadly, bush hangs over the canyon sides, making it impossible to see this spectacular canyon.

A few people were walking this ‘through tramp’ for the first time and they were all suitably impressed, as we all were. Whirinaki Forest Park is always a delight to walk in. We are so glad that the logging of native trees has stopped and that Whirinaki is protected for us all.

It was a long trip home, retracing the 30km of bumpy road before hitting SH 2. Special thanks again to the drivers and Alison for organising the tramp, weather and vehicle logistics. It was a super (and long) day out. We arrived home at around 8pm.

Sparrowhawk bivvy, Ruahine Forest Park, Saturday 6 August 2022 Banner Photo: The view east, towards the Wakararas and beyond On a beautiful … END_OF_DOCUMENT_TOKEN_TO_BE_REPLACED

Prologue: The author was on the Whirinaki tramp, reported on this website under the headline 'We observe a mock turtle and the rodent of Upper Te … END_OF_DOCUMENT_TOKEN_TO_BE_REPLACED

Ruahine User Group A meeting was held on Monday 25 July, in the NZDA rooms in Dannevirke.  Julia … END_OF_DOCUMENT_TOKEN_TO_BE_REPLACED

Ruahine User Group A meeting was held on Monday 25 July, in the NZDA rooms in Dannevirke.  Julia … END_OF_DOCUMENT_TOKEN_TO_BE_REPLACED

Ruahine User Group A meeting was held on Monday 25 July, in the NZDA rooms in Dannevirke.  Julia … END_OF_DOCUMENT_TOKEN_TO_BE_REPLACED

Ruahine User Group A meeting was held on Monday 25 July, in the NZDA rooms in Dannevirke.  Julia … END_OF_DOCUMENT_TOKEN_TO_BE_REPLACED