There were seven of us on this tramp. Considering the weather forecast for heavy rain all day, and the rugby match between the ABs and Pumas in Napier on that evening, I am surprised that we got that many trampers out for a walk. 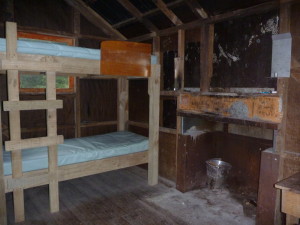 The interior of Sentry Box Hut

But we all wanted to get some outdoor air, as it had been raining most of the week and we needed the change of scenery.

We did not do the Golden Crown to Sentry Box loop as scheduled, as there was no point having lunch in the rain, so we all opted for Parks Peak Hut.

Along the way, Sentry Box Hut is still looking good after the make-over in which Napier Tramping Club provided some assistance. The new wooden bunks look in keeping with this historic hut.

The walk to the tops junction took Gossie and me 1hr 20mins and we weren’t even going fast. Just a steady climb, with the last 10 metres through some long grassy patches. On reaching, there were a few spots of snow left – surprising after all the mild temperatures and rain we have had here in HB. 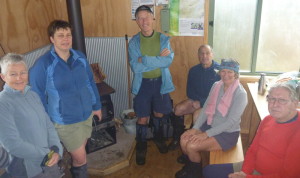 The lunch group – minus Gossie who thought it was too posed .. yeah he’s right

When everyone re-grouped, we decided to head for the hut, get the fire going and have a long lunch break if possible. We were very early, but this was the best option, as light rain was falling. On reaching the hut, the low cloud and misty rain made it seem ethereal.

Gossie had a reputation to maintain, so he got the fire going in the corker so that we could all warm up a bit. If we had not done this, it would have been a quick break turn-around. We all had our respective thermos drinks and lunches.

The loo has been moved, and is now much easier to reach from the hut on a cold night. On re-entering the hut, you realised how much heat the fire and people were creating. 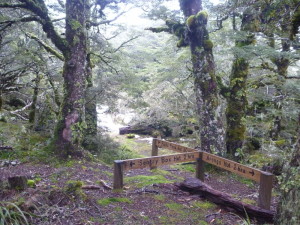 We left just on the hour, after cleaning up. The walk back down was even quicker, so we had a final snack break at Sentry Box Hut. On the way, we thought we spotted a deer, and the debate continued for a while; however, it did not move for five minutes so we decided it was a patch of dracophyllum, which had the exact colouring of a deer.

The weather held up for up us, and we had all enjoyed a good walk up to Parks Peak Hut.