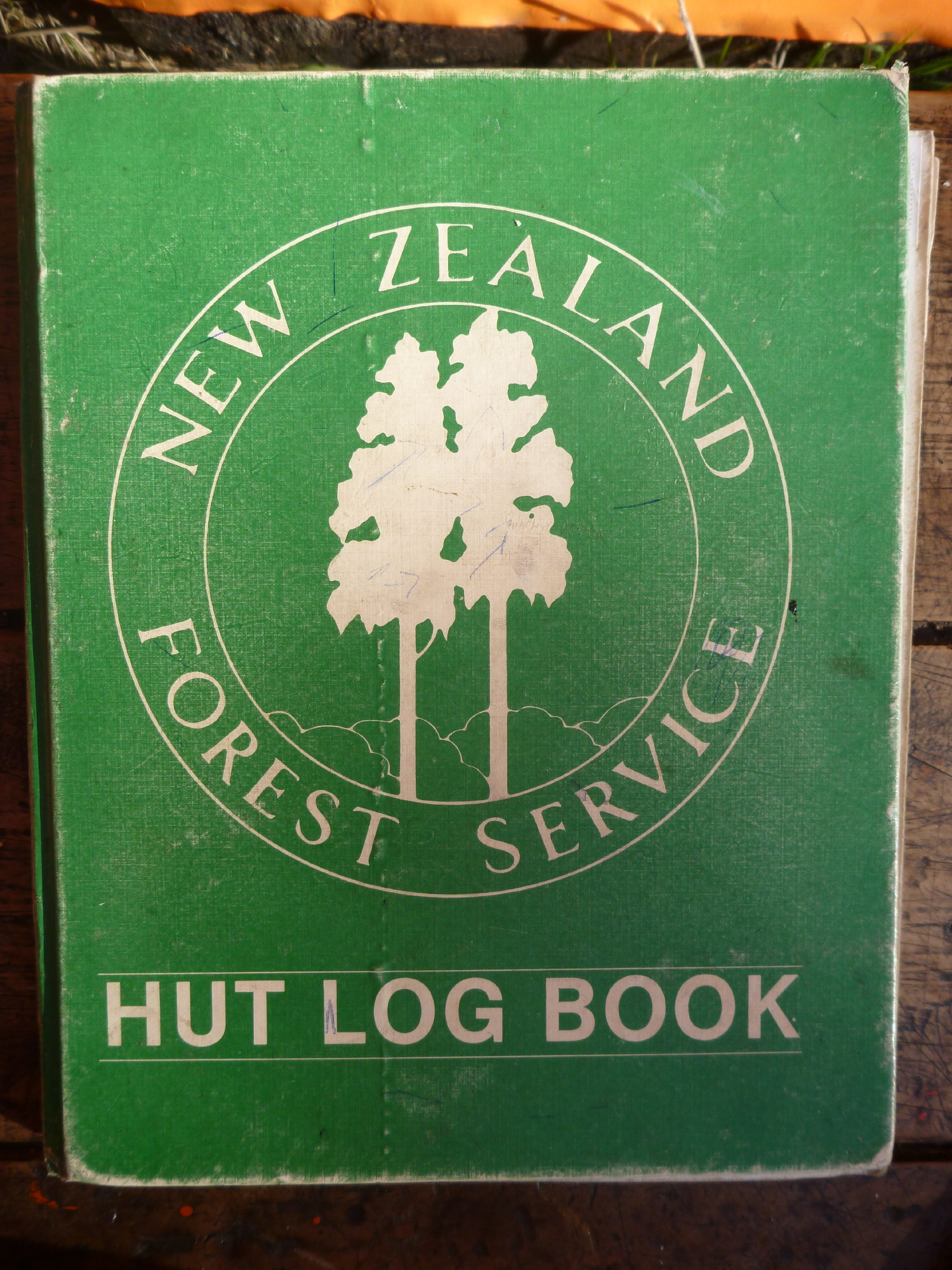 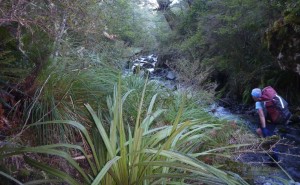 This was a weekend where Alison and I were joined by the day tramp party for part of the walk up to the tributary stream which takes you down to Smith Stream Hut.

It was also a weekend where we enjoyed seeing many different types of vegatation. After crossing the bridge over the Waipawa River, swinging around the metal posts which stop vehicular traffic, the track begins with a walk up a 4WD farm track fence line. We noticed the track was lined with many young rimu (about 20 metres in height already). Fantastic to see them flourishing, as well as the clematis flowering as it scrambled over trees, and the red hues of the red beech tree flowers about to burst open. Does this mean that there will be a rat invasion this year? 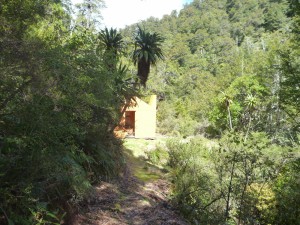 After dropping down to Middle Stream, which seemed to have more water in it than usual but was running clear, we clambered up through grass, then an open grass area before entering and sidling around to the saddle. The views from the open grass area of the Ruahines were stunning, and there was a little bit of snow still on some tops.

After dropping down into the stream, Alison and I made our way along it, crossing where necessary, and looking for ways to keep our feet dry. But no luck as, in some parts, it was easier to travel in the stream. The banks of the stream were lined with mountain astelia (astelia fragrans), which is easy to push through, and forgiving.

We stopped for lunch just short of the climb out of the stream, and checked our position. Not far to go, which pleased Alison, whose feet were very cold. 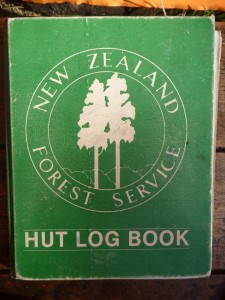 We climbed up and past the slip on the new track which Mayer (DoC Ranger at Onga Onga) has cut. Great job. Then the hut came into view. The sun shone and the hut was tidy and well looked after. It has ‘historic’ status, which it warrants, as well as being in a great spot.

We enjoyed the afternoon sun until 5.30, and we collected some more firewood. We also checked out the camping spots down by Smith Stream, where there is plenty of room.

We got a good fire going, although it was relatively warm. Just nice ambience whilst cooking dinner.

The next day was a blue sky one, and we retraced our walk in and out of the stream, finding a few more bank options.

We made short work of the climb back up to the saddle, and kept on going to stop on the open grassy area and have a snack break and wring out the socks. We checked out our position on the map, and identified the spurs leading up to the tops. We had read of a tramping party coming from Waterfall Hut, to Smith Stream Hut via Rangioteatua, and then heading south to high point 1715m, and Broken Ridge. I assume that from high point 1489, they continued to Hinerua Hut, and then come upstream to Smith Stream Hut. There is also a track (which you join when coming out of the tributary, heading south for Smith Stream Hut) which also heads for the high point 1715m. Some more territory to be explored.

We enjoyed the walk back, and Alison was back in time to watch the Magpies rugby game. I just chilled out after two days in the bush.

Mackintosh Hut/Rogue Ridge, Kaweka FP, Saturday 17 September 2022 Banner Photo: The leaning sign at the top of Mackintosh Spur It was a sunny, … END_OF_DOCUMENT_TOKEN_TO_BE_REPLACED

Shine Falls, Local, Wednesday 7 September 2022 Banner Photo: Group selfie and the falls Nine of us set off on a very frosty morning from Park … END_OF_DOCUMENT_TOKEN_TO_BE_REPLACED

A-Frame to Stanfield Hut, Ruahine FP, Saturday 3 September 2022 Banner Photo: At the A-Frame Hut We had a full vanload booked to do this trip. … END_OF_DOCUMENT_TOKEN_TO_BE_REPLACED