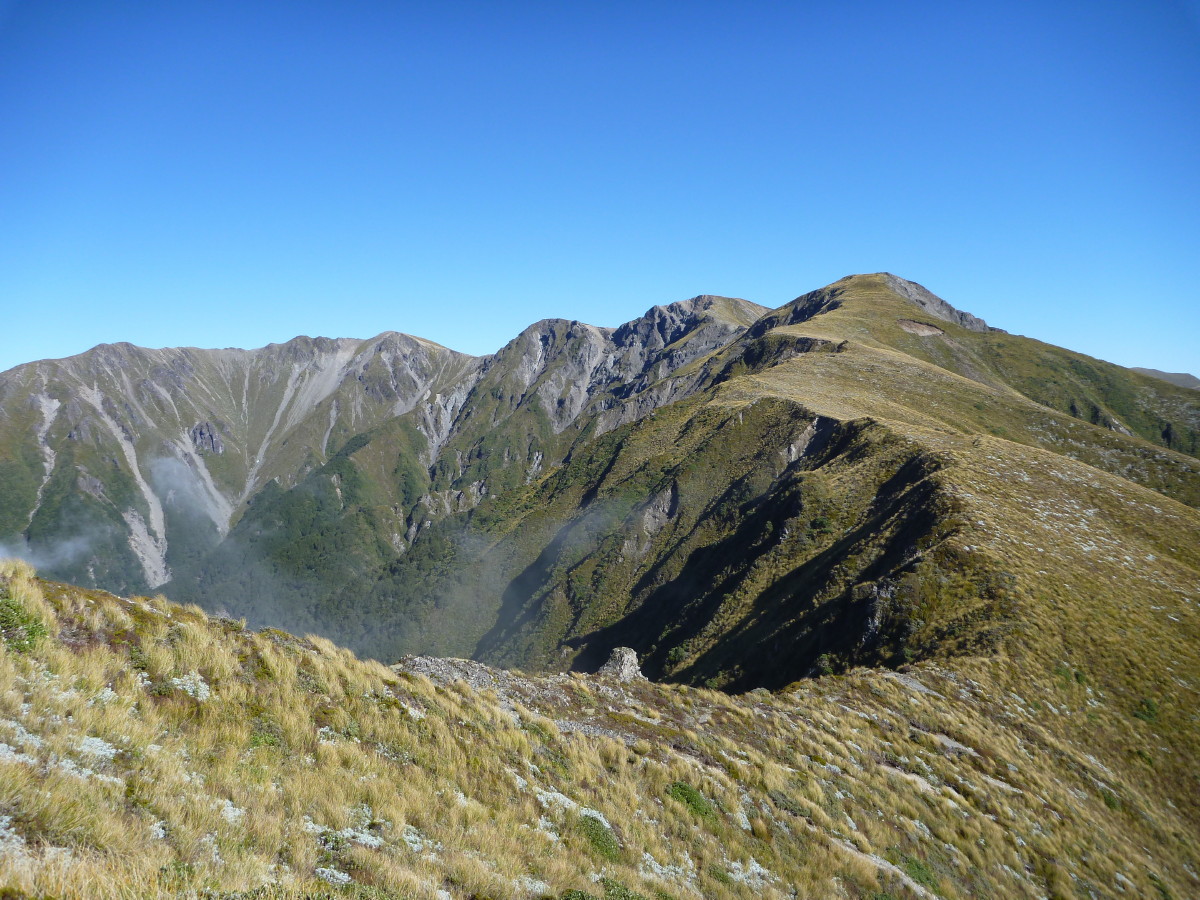 Les and I are gradually crossing off parts of the Ruahine Forest Park that we have not tramped (it’s called ‘red lining’). The trip this weekend was to complete a circuit of the Ruahine tops, and spend a night in Smith Stream Hut. That was plan A.

We left the North Block Road car park for the Sunrise Hut track, which branches off to the Waipawa River and Waipawa Forks Hut. This saves us a few kms of wet feet. The wide benched Sunrise track turns into a one-lane lovely bush track, crossing over two little streams. 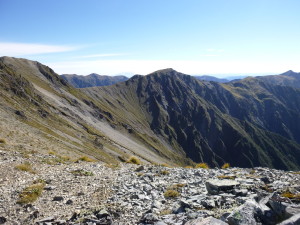 On the ridge descending to Smith Stream Hut, looking back at Rangioteatua

Once on the Waipawa River, it is a gradual uphill to Waipawa Saddle. There are orange plastic tape markers where there are riverbank cut-throughs, and this should be taken literally. One of them is through a swathe of cutty grass, on which I got a small nick in my finger. It bled profusely, and I ignored it for a while. Then I realised that I was creating a blood trail, and needed to stop the flow. A stop to put on toilet paper bandage and plaster tape worked a treat. A glove also kept everything safe and sound. 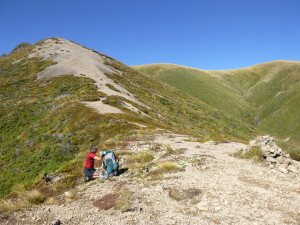 On Waipawa Saddle, looking towards the scree up to Three Johns

We reached Waipawa Saddle around noon and tackled the shingle slide up to the Three Johns; I was not feeling brilliant, feeling exhausted and did not know why. We rested and looked at the ridges yet to be climbed. Cloud covered the Central Hawkes Bay farmland and drifted up to the tops. I was not up to this today, so we dropped back down to Waipawa Saddle and headed for Waikamaka Hut. It is only 40 minutes from the saddle.

The hut sits on the confluence of two streams, the Waikamaka and a tributary. The sun was still shining, and some R&R was taken. Waikamaka Hut is owned by Heretaunga Tramping Club, and has had a recent paint. The loo is really quaint.

A three-course dinner started with a soup followed by a home dehy dinner using Backcountry mince of chilli con carne with instant rice, followed by Backcountry Ice-cream, made up in a cup. Finally, a ‘get to sleep’ tonic of Green Ginger Wine. All this accompanied by chat from Les.

The next morning, with me feeling a lot better, we decided to go out via Te Atuoparapara if I felt up to it once we reached Waipawa Saddle. 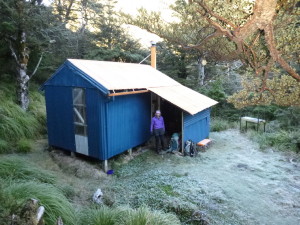 Waikamaka Hut, and the frosty morning

The morning dawned with a hard frost, and three layers were necessary to keep warm. We left the hut at 8.15. The rocks were icy and very slippery, but we made it back up in 45 minutes again, reaching the saddle at 9 am. That’s when Les sprang a surprise by suggesting we do our original loop plan, to 1635 then up to Rangioteatua 1704, then 1715, where we turn south-east down a ridge to Smith Stream Hut. Then we would walk out, via Smith Stream, to the Waipawa River.

Wow, the day was a sky-blue one, so why not? The scree slope was easier, but from the Three Johns the walk to 1635 became deep tussock and spaniard. It was hard to walk at times, pulling yourself up using the tussock. The trick was to walk in between the tussocks; going over them was energy-sapping.

From there it was much easier on the ridge line, which was either very short tussock or gravel. We kept on to Rangioteatua where there was a small cairn, then on to 1715 where there is evidence of a former trig. We reached it quickly, then checked the map to confirm that we needed to start going down. After all that climbing, it was a breeze. We looked at Broken Ridge, which is the way to Hinerua Hut. That is now on Les’s tramp list.

The descent is poled, just to make sure you take the south-western ridge, when it splits. Soon we reached the bushline, and found a sunny spot to have a quick rest and some food (fuel). When we looked back, it was clear we had come a very long way. 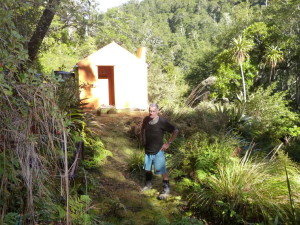 Still, there was no time to waste we decided to continue down. The track is a lovely walk. Not before time, we reached the hut at 1.25pm. We gave ourselves half an hour, with a brew-up and more food. Smith Stream Hut (where Alison and I spent a night a year or so ago) is in a lovely location. We got the bench outside in the sun and relaxed.

We left just after two oclock, reaching Smith Stream in 15 minutes, and then spent the next 45 minutes in the river. Keeping boots dry was not a priority so, for speed, we went straight up the riverbed sides. The signpost at the hut had indicated four and a half hours to the Waipawa River.

Les can go like the clappers up rivers, and this was no different. We made it to the track which leaves the stream in one hour from the hut. His feet were getting cold, as was his core. We climbed up to the saddle, and then sidled around to the grassy patch we had seen from the tops. We sat and enjoyed the sun and view for 10 minutes, as we were making good time.

The track is well poled across the regenerating manuka, and has been cut recently, and we descended to Middle Stream. Soon we were across it and then another before reaching the Ruahine Forest Park Boundary at around 4.50, so it had taken less than threee hours.

The walk down the farm track and then farm road to the Waipawa River, and then up to our car took 40 minutes. We reached the car at 5.30, elated that we had achieved our original goal and got back to the car before nightfall. 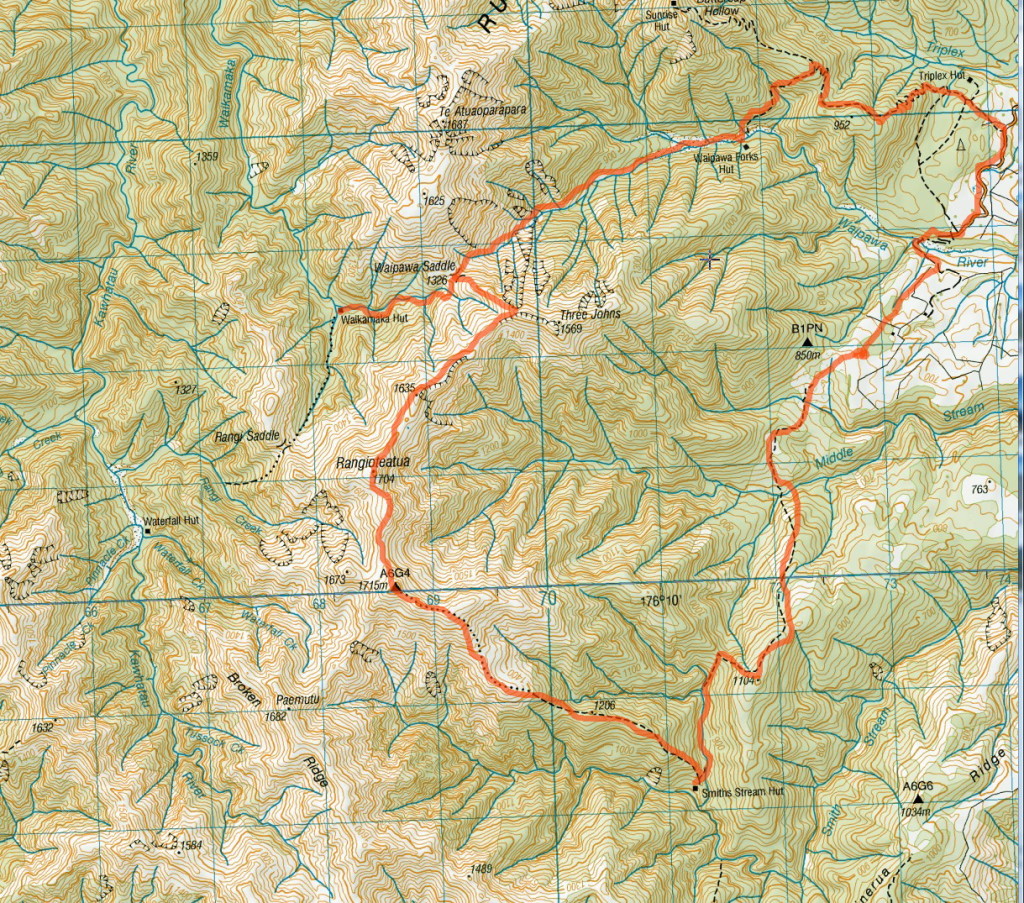